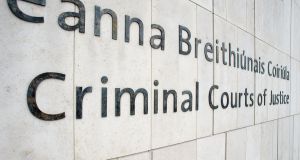 Rachel Kearney said her boyfriend Stephen “Apples” Kavanagh was pleading with her as he was being stabbed by the accused and asked her: “Will you help me. He is going to kill me”. Photograph: Dave Meehan/The Irish Times

A woman has described to a murder trial the moment she saw the accused “slaughtering” and “over-killing” her boyfriend after a row over missing crack cocaine.

The witness told the jury that Darren Houlden was on top of her partner and had his knees on his back as he stabbed the victim.

Rachel Kearney said her boyfriend Stephen ‘Apples’ Kavanagh was pleading with her as he was being stabbed by the accused and asked her: “Will you help me? He is going to kill me”.

Ms Kearney was giving evidence on Wednesady in the trial of Mr Houlden (44), who is charged with murdering 37-year-old Mr Kavanagh in the early hours of Monday, May 6th, 2019.

Mr Houlden of The Crescent, Meadowvale, Arklow, Co Wicklow has pleaded not guilty to murder but guilty to the manslaughter of Mr Kavanagh at the same location. His plea was not accepted by the Director of Public Prosecutions (DPP) and he is on trial at the Central Criminal Court.

Giving evidence on Wednesday, Ms Kearney told prosecuting counsel John Fitzgerald SC that she knew Mr Kavanagh since she was 13 years of age and had been in a relationship with him for a few weeks at the time.

Ms Kearney testified that the accused man and her boyfriend had pulled up beside her in a car in Arklow on the afternoon of May 4th. “Stephen asked did I want to go for a cup of tea and a joint in Darren’s house, I said I might as well,” said the witness.

Ms Kearney said she went with the two men to Jack White’s Inn a short time later, where Mr Houlden parked his car beside another vehicle. She told the jury that there was a man sitting in the other car and they only stayed five minutes before returning to Mr Houlden’s parents house, who the court heard were away in Spain at the time.

Ms Kearney said the three of them spent the night smoking crack cocaine from a pipe in the accused’s bedroom before going to bed around 5.30am that morning.

The following day, the witness said that Mr Houlden drove her to get some weed and a bag of heroin. “The heroin wasn’t for me, it was for Darren,” she added.

Ms Kearney said the accused smoked heroin in his house later that day and herself and Mr Kavanagh had smoked a joint. She told Mr Fitzgerald that once Mr Houlden was “getting plenty of drugs and smoking whatever, everything was alright”.

The witness said that she and her boyfriend were getting ready to leave the accused’s house that evening when Mr Kavanagh noticed that his crack cocaine was missing and got upset. “He had hid it in Darren’s room, behind the door. When he noticed it was gone, there was arguing going on back and forwards. Stephen was saying where is my drugs and Darren was saying he didn’t take it but he did have them,” she continued.

Ms Kearney said the accused got aggressive and started punching holes in the walls. She said Mr Kavanagh was angry that he had been “robbed” by the accused and said he was going to make a phone call to a friend. “I don’t know whether he made that call as I was in the other room looking for the drugs,” she added.

A few minutes later, Ms Kearney said she shouted in the front door of the house but got no answer. “I ran to the top of the stairs and Darren was stabbing Stephen, he had his knees on his back, slaughtering him, over-killing him,” she said. The witness told Mr Fitzgerald that her boyfriend was face down on the floor and the accused had his two knees on his back as he stabbed him.

Ms Kearney said her boyfriend said to her “will you help me, he is going to kill me” before she grabbed Mr Houlden by the arm. “I wasn’t strong enough to stop him. I said please stop you are killing him and he [Mr Houlden] answered me calmly saying ‘Ok, I will’,” she said. The final two stab wounds were to Mr Kavanagh’s neck and head, she continued.

The witness said she thought she would be killed next so she grabbed a mobile phone and rang 999.“I was afraid, I said if he catches me, that is me gone,” she said.

Mr Grehan told the witness that a lot of what had happened that day wasn’t at issue and his client had killed Mr Kavanagh. “Oh yeah, he stabbed him 37 times, he overkilled him, he didn’t just murder him, he slaughtered him,” said Ms Kearney.

Mr Grehan put it to the girlfriend of the victim that his client was “out of his mind” at the time, almost “like a psycho”. Ms Kearney disagreed with this.

The barrister also suggested to the witness that they had gone to Jack White’s Inn to get crack cocaine and she knew very well that her boyfriend was buying the drugs. The witness said this was not the case.

Mr Grehan further put it to Ms Kearney that her boyfriend had made a phone call when his drugs had gone missing, which was “to send bodies” to the accused’s house and Mr Houlden would be brought up the mountains and shot. “No, Stephen was not a violent person,” she said.

Ms Kearney later agreed with counsel that she had heard her boyfriend say he was going to make a phone call but did not see or hear him make any phone calls.

The witness told the barrister that her boyfriend had not accused her of taking the crack cocaine from him as she said she would not need to take anything from him.

The witness agreed that Mr Kavanagh had first noticed that the drugs were missing around 8.30pm that evening. “After 45 minutes he said he wasn’t looking for it anymore as he knew where he had put it,” she said.

Mr Grehan asked the witness if his client was out of control at the time. “I wouldn’t say out of control, he was caught and didn’t know what to do,” she said.

Ms Kearney disagreed with counsel that there was a long build up to this event on the night. Mr Grehan suggested to the witness that at one stage when Mr Houlden thought that people were coming to his house, he had put an axe at the front door and later got a knife from the kitchen, which he had shown to the witness. “I saw no knife until I got to the top of the stairs,” she replied.

Mr Grehan suggested to the witness that his client had attacked her boyfriend to stop him from making a phone call “to get people to come up to the house to shoot Darren”. “No, that’s all lies,” she said.

Garda Dean Bolger from Arklow Garda Station said he received a call from the control unit at around 00.30 on May 6th informing him that there had been a stabbing in Meadowvale. The witness said he found a male with a faint pulse, lying on his right hand side in one of the bedrooms of the house. Gda Bolger said he recognised that it was Stephen Kavanagh when he rolled the man over onto the flat of his back. Gda Bolger observed a large laceration to the back of the victim’s head as well as a large number of cuts to his neck and forearms.

Paramedic Laura Hogan testified that Mr Kavanagh arrived at St Vincent’s Hospital at 2am. He died at 2.35am in the early hours of May 6th, 2019, the court heard.

In his opening address, Mr Fitzgerald said that Mr Houlden walked into a garda station wearing blood-stained clothes and carrying a knife before admitting to the fatal stabbing. He said the jury would hear that the accused man said he “went into a rage” and stabbed Mr Kavanagh to death after the victim allegedly threatened to make a phone call about missing drugs.

The trial continues on Thursday before Ms Justice Carmel Stewart and a jury of eight men and four women. It is expected to last two weeks.