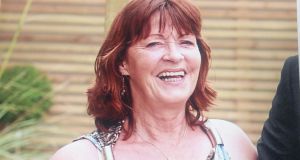 Kieran Greene has pleaded not guilty to murdering Patricia O’Connor (above) at her home in Rathfarnham, Dublin

The body of a 61-year-old woman was most likely dismembered using a power tool before her remains were scattered at nine different locations in the Dublin and Wicklow mountains, a murder trial has heard.

However, the jury heard there was “more irregularity” on the deceased’s severed wrists and hands, raising the possibility that they had been removed by a non-powered hand-held saw.

Former Deputy State Pathologist, Dr Michael Curtis, on Wednesday gave evidence in the trial of father-of-three Kieran Greene (34), who has pleaded not guilty to murdering Patricia O’Connor at her home in Mountainview Park, Rathfarnham, Dublin 14 on May 29th, 2017.

The Central Criminal Court has heard that the body of Mrs O’Connor was dismembered into 15 parts that were found at nine locations in the Dublin and Wicklow mountains between June 10th and 14th, 2017.

Evidence has been given that a post-mortem examination confirmed she suffered a “violent death”.

The trial has also heard that Mr Greene walked into Rathfarnham Garda station on June 12th, 2017 and told a detective that he had done “something terrible” and had scattered the body parts of the grandmother in the mountains.

In his evidence on Wednesday, Dr Curtis told prosecution counsel Roisin Lacey SC that he performed post mortems on 15 separate body parts over four days between June 11th and 14th, 2017.

“The act of dismemberment was most probably carried out with a power tool such as a reciprocating saw. These appearances contrasted with the severed wrists and hands, where there was more irregularity at the bone ends,” said Dr Curtis, adding that this raised the possibility that the hands had been removed with a non-powered hand-held saw.

He said the deceased’s head was struck a minimum of three blows with a solid implement resulting in five scalp lacerations and the cause of death was blunt force trauma to the head.

There was no evidence of any defensive-type injuries to Mrs O’Connor’s hands or forearms and no ligature marks were present, he said.

Under cross-examination by Conor Devally SC, defending Mr Greene, Dr Curtis agreed that Mrs O’Connor’s entire body had been recovered. He said it was not possible to exclude the possibility that one of the wounds to her head could have been caused by falling onto a shower step and it was probable she died rapidly.

Earlier on Wednesday, the court heard that Kieran Greene told gardaí that he believed Patricia O’Connor had tried to kill her husband by pushing him down the stairs and that she wanted the family dead.

“She wanted us dead one at a time, starting with Gus. She wanted us all dead, down to the kids,” the father-of-three told interviewing detectives.

Kieran Greene also said Mrs O’Connor told her daughter that if she killed her father, she would sign the house over to her. Louise O’Connor “automatically said no”, Mr Greene told detectives.

Det Gda Connolly said he asked Mr Greene what he meant when he told them in his voluntary statement about it being “a long 10 years”.

The accused replied: “It was basically just constant, not one day she doesn’t give out, horrific stuff, the kids hide under the table.”

Mr Greene said “over the years it was getting worse” and Mrs O’Connor had “f**ked a shovel” at one of the children’s toys, smashing it. “She use[d] to throw Christmas toys out, which weren’t cheap and spend all the money her husband had saved,” he continued.

“I’m nearly 100 per cent I heard her [Mrs O’Connor] bedroom door close after. I felt she did something to push him down the stairs,” he said. He said he believed Mrs O’Connor had tried to kill Gus by making him fall down the stairs.

The accused informed gardaí that his partner Louise O’Connor had been diagnosed with Graves’ disease five years ago.

Mrs O’Connor told her daughter Louise that if she killed her father Gus she would sign the house over to her, said Mr Greene. “She [Mrs O’Connor] said there was a symptom called “Graves’ rage” where you can kill anybody and get away with murder. Louise automatically said no,” he continued.

Mr Greene claimed Mrs O’Connor wanted her husband dead and had said this for years, saying “it wasn’t anything new”. “I felt for everyone’s safety in the house, I told loads of people over the years but nothing happened. The kids had a nightmare of a life with her,” he remarked.

The accused man said it would be “completely different” if Mrs O’Connor had gone away as the children would no longer be assaulted and abused.

Gardaí put it to Mr Greene that he had previously told them he sobbed and felt free after burying her and they asked him what he meant by this. “My kids would be safe, no one would have to fear her,” he indicated.

Referring to his partner Louise O’Connor, Mr Greene said she is allergic to penicillin and one day had taken a sip of coke. “Within minutes her lips swelled up. I think she [Mrs O’Connor] was trying to kill us but couldn’t prove it,” he said, adding that they would all be safer if she was gone.

Describing the incident with the hurl again on May 29th, Mr Greene said Mrs O’Connor had attacked him first and he had defended himself. “I couldn’t overpower her, if I wanted to kill her why would I wait 10 years,” he said, adding that the event wasn’t planned nor was it intentional.

Mr Greene said he reckoned Mrs O’Connor had slipped in the bathroom and hit her head.

When gardaí put it to him that he could have got out of the bathroom on the night, he said: “Yeah and left my family behind.”

Gardaí asked Mr Greene why he didn’t help Mrs O’Connor, as he had time to save her but instead let her die. In reply, Mr Greene said he panicked, did not know what to do and that was the reason he did not call for help. Following this, the accused said he had let her die so his kids would be safe.

It was put to him by gardaí that a technical examination of the injuries on the deceased’s body parts did not match the description of a saw. He was asked if he could explain this, and replied “no”.

He also could not explain why there was no blood in his car, when he had told gardaí that he drove in the same clothes which he said he had cut her up in.

Mr Greene could not further assist gardaí when they pointed out that, despite 100 people searching the area, they could not find the tools or clothes Mr Greene had said he flung out of his car in the Wicklow mountains.

Mr Greene agreed that Louise O’Connor’s former partner, Keith Johnston, was seen on CCTV with him at Mr Price on the afternoon of June 9th, when he bought a petrol can, a tow rope and plastic blades.

He maintained that Mr Johnston knew nothing about what had happened to Mrs O’Connor.

“I told you everything from the beginning. I have never been in trouble before. I’m being honest. I did it for my kids,” he explained. Finally, he told gardaí that he came to them “for what he did and the whole 10 years of hell”.

When Mr Greene was formally charged with the murder of Mrs O’Connor, he replied: “It was self-defence”.

The trial continues on Thursday before Mr Justice Paul McDermott and a jury of six men and six women.