The human mind can only take so much coincidence, jury in Quirke trial told 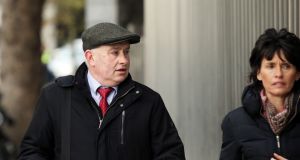 Patrick Quirke (50), of Breanshamore, Co. Tipperary, at court with his wife, Imelda. He has pleaded not guilty to the murder of Bobby Ryan.Photograph:Collins Courts

The prosecution case against farmer Patrick Quirke, who denies murdering his love rival Bobby ‘Mr Moonlight’ Ryan, is “forensically barren” but calls on the support of the jury’s common sense, lawyers for the State have said.

Michael Bowman SC told the jury of six men and six women at the Central Criminal Court that while Mr Quirke retains the presumption of innocence, when they look at the evidence they will be compelled to find him guilty of murder.

Mr Quirke (50) of Breanshamore, Co Tipperary has pleaded not guilty to the murder of Bobby Ryan, a part-time DJ known as Mr Moonlight. Mr Ryan went missing on June 3rd, 2011 after leaving his girlfriend Mary Lowry’s home at about 6.30am.

His body was found in an underground run-off tank on the farm owned by Ms Lowry and leased by the accused at Fawnagown, Tipperary 22 months later in April, 2013. The prosecution has claimed Mr Quirke murdered Mr Ryan so he could rekindle an affair with Ms Lowry (52).

On Thursday, Mr Bowman reminded the jury that the prosecution case is based on circumstantial evidence and is “forensically barren”. There is no weapon, no exact location or time of death.

The human mind, he said, can take only so much coincidence before shaking its head and saying: “That’s not coincidence, that’s planned.”

Mr Bowman told the jury the trial was not about Ms Lowry, although she is important. Referring to evidence that came out during defence cross examination of witnesses, he said the case was also not about the lid of the tank breaking or whether photos or videos were taken. It was not about gardaí talking in a coffee shop or about gardaí following up a tip-off from a water diviner.

It was, he said, about Mr Ryan, a man who loved life, his job, music, dancing. He loved his girlfriend and very dearly loved his children Robert jnr and Michelle. He was, Mr Bowman said, universally loved and liked. Who, counsel asked, would want to kill Mr Ryan and strip him of his possessions, his clothes, his dignity, and leave his body to decompose for 22 months in a sealed chamber on a farm in Tipperary?

Murder, Mr Bowman said, was not Mr Quirke’s first attempt to sabotage the relationship between Mr Ryan and Ms Lowry. His first attempt was when he took Ms Lowry’s phone and texted Mr Ryan to say, “I’m the man” and in a follow-up phone call told him he was in a relationship with Ms Lowry and that Mr Ryan was “being played for a fool”.

Mr Bowman reminded the jury that the accused told gardaí that he wished the best for Ms Lowry in her new relationship and wanted to remain friends with her for the sake of his family, but, Mr Bowman said, “his actions speak contrary to that”. The second attempt at sabotage came, he said, when Mr Quirke reported Ms Lowry to Tusla, the child and family agency, claiming she was neglecting her children emotionally because of her new relationship. Mr Ryan, counsel said, had no chance if Tusla got involved and Ms Lowry was forced to choose between him and her children.

When that attempt failed, Mr Bowman said the accused now knew that she didn’t want to continue the “seedy” relationship with him and Mr Quirke said so in a letter to an agony aunt in a Sunday newspaper. He was “heartbroken and angry,” he wrote, and Mr Bowman reminded the jury that he said he was still in love with his ex-lover. Counsel added: “I don’t think he accepts that relationship is over.”

Mr Bowman asked the jury to compare the evidence of the Lowry family who said they were “delighted” and “happy” for Mary when they found out she was seeing Mr Ryan with the statements of Mr Quirke to gardaí in which he said the Lowry family was “disgusted” and that Mary had “some neck” showing up to a family function with Bobby.

On December 3rd 2012, Mr Bowman said, the accused was “well and truly rumbled” when he was seen on CCTV in Ms Lowry’s shed interfering with her clothes line and her post box and using a key to open her front door, setting off the house alarm.

Mr Bowman also reminded the jury of the evidence of artificial inseminator Breda O’Dwyer, who he said was compelling in her evidence that at 9.30am on the day Mr Ryan went missing, Mr Quirke was milking his cows. This was, she said, unusual as he would usually be finished milking and have the parlour cleaned by the time she would arrive. Mr Bowman further reminded them that she had been visiting Mr Quirke’s farm regularly for 15 years at that point.

On the day that Mr Ryan’s body was recovered, Mr Bowman told the jury they should look at the clothes the accused man was wearing. He told gardaí he was planning to agitate slurry, a dirty job, yet he was wearing a jacket, shirt and pants rather than the overalls he wore on other days.

Once he discovered the body, he told gardaí he was in shock and afraid and so called his wife. Mr Bowman reminded the jury that he also called his vet and his voicemail during this time. Mr Bowman added; “I don’t think he was shocked or afraid for one moment.”

Mr Bowman will continue his closing speech on Friday in front of Justice Eileen Creedon.