Murder trial jury must decide if accused woman was provoked 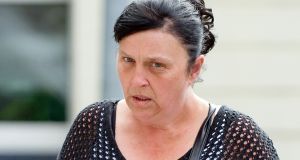 Paula Farrell: has pleaded not guilty to murdering Wayne McQuillan (30) at her home in January, 2014. Photograph: Collins.

A murder trial jury must decide if a 47-year-old woman who stabbed her partner to death was provoked after he allegedly sexually assaulted her on a sofa in her home.

Mr Justice Paul McDermott will finish charging the jurors on Friday morning in the trial of Paula Farrell of Rathmullen Park in Drogheda, Co Louth.

She has pleaded not guilty to murder but guilty to manslaughter for the unlawful killing of Wayne ‘Quilly’ McQuillan (30) at her home on New Year’s Day 2014.

Continuing his charge to the jury at the Central Criminal Court, Mr Justice McDermott said provocation is a partial defence which reduces a charge of murder to manslaughter even if Ms Farrell had the intention to kill or cause serious injury to Mr McQuillan.

He said provocation can be relied upon where there has been a sudden and temporary loss of self-control such that Ms Farrell was unable to prevent herself from committing the acts which led to the death of her boyfriend.

The judge said the test for provocation is a subjective one and one must ask themselves whether Ms Farrell with her particular history and personality may have been provoked to such an extent as to lose her self-control in response to the acts and words of Mr McQuillan so that she was unable to prevent herself from committing the stabbing.

“The act must come suddenly and before there has been time for passions to cool. The act cannot be tinged with calculation,” he remarked.

Mr Justice McDermott said the jury had to identify the material which gave rise to the provocation and in this case it appeared to be the alleged sexual assault by Mr McQuillan on Ms Farrell.

“You have to decide whether the evidence in relation to that is credible or not. It is not enough to show she lost her temper or was easily provoked,” he continued.

The mother-of-three has testified that Mr McQuillan had tried to have sex with her, that she did not want to have sex and that he had started strangling her with his hands before she went to the kitchen for a knife.

“I thought I was dying, I couldn’t breathe,” she told her barrister Caroline Biggs SC.

Ms Farrell has accepted in her evidence that she stabbed Mr McQuillan with a knife four times but said she only remembered stabbing him twice.

Mr Justice McDermott pointed out that the loss of control must be total and actions of retaliation, resentment or a desire to injure someone are insufficient.

In considering the evidence, the judge said the jury must decide if Ms Farrell intended to kill or cause serious injury when she inflicted the stab wounds on Mr McQuillan.

“If it cannot be established that the assault was carried out with an intention to kill or cause serious injury that is not murder. The offence is to be regarded as the lesser but also very serious offence of manslaughter,” he outlined.

Mr Justice McDermott said the jury must consider the consumption of alcohol in the case and the fact a person’s mind was affected by drink was not a defence to murder.

The jurors must assess the effect of alcohol on Ms Farrell on the night and if she had formed the requisite intention to kill when she inflicted the stab wounds on the deceased, he said.

Evidence has been given that Ms Farrell had six litres of alcoholic drink in her system on the night. Gardaí found 12 empty cans of Bulmers and three empty two-litre bottles of Woodgate cider in a rubbish bag in the kitchen of the accused’s home.

“If the evidence of intoxication raises a reasonable doubt in your minds as to whether she had the intention to kill whilst committing these acts, you must acquit her of murder and convict her of manslaughter,” he indicated.

Evidence has been given in the four-week trial that Ms Farrell was sexually abused by a named man between seven and 14 years of age and that she started to drink heavily when she was 20 years old.

The jury has heard that Ms Farrell told gardaí in her interviews that she and Mr McQuillan had started “tackling each other” in the kitchen on the night and “he had me by the wrist and neck and I got a bump on my head from him.”

She said Mr McQuillan “had me on the two-seater in the kitchen” and when she got up, she said, “I didn’t want him to get the better of me. I got the knife then and I stuck the knife in him.” She thought she stabbed him “towards the top of his chest” and a second time “a bit lower down”, the court heard.

Evidence has also been given by former Deputy State Pathologist Dr Michael Curtis that he found four stab wounds on Mr McQuillan, one to the upper right arm, one to the front of the chest and two wounds to the left shoulder which were situated 1.1cm apart from each other and parallel.

The expert witness told the jury that there could have been “potential survival with prompt medical intervention” for Mr McQuillan.

Mr Justice McDermott told the jury of seven men and four women that he will conclude going through the evidence on Friday morning and will then invite them to consider their verdict.