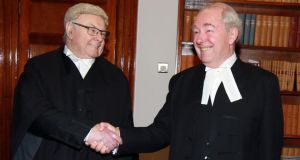 Mr Justice Paul Carney receives a congratulatory handshake from the president of the High Court, Mr Justice Nicholas Kearns, at the Four Courts on the occasion of his retirement. Photograph: Collins Courts

Mr Justice Paul Carney has served at the Central Criminal Court since 1991, presiding over more rape and murder trials than any of his colleagues. Highly intelligent and often controversial, his retirement marks the end of an era for Ireland’s criminal justice system.

Educated at Uppsala in Sweden and at Gonzaga College in Dublin, before graduating from University College Dublin and the King’s Inns, Mr Justice Carney (71) has had an aversion to being called judge in court.

The Criminal Courts of Justice lore has it that he told practitioners “a judge is something one sees on Wanderly Wagon” and he should not be called anything or else he should be called “your lordship”.

The son of two distinguished academics, Mr Justice Carney was called to the Bar in 1966 and to the Inner Bar in 1980, after which he specialised in criminal law. He was appointed to the High Court in 1991 and, until his retirement, was the presiding judge of its criminal division.

His preference for formality has meant hat although legislation relaxed the requirement for wigs in court, barristers appearing before him often opted to wear one.

Sometimes perceived as gruff, he has always been quick to get to the core of issues before him and hasn’t tolerated time-wasting. He has been perceived as a judge who didn’t have favourites; his bark was spread evenly, as one barrister puts it. He could be enormously compassionate at times and has shown no fear when it came to making controversial decisions.

He was the judge in the high-profile case involving Mayo farmer Pádraig Nally of Claremorris, Co Mayo, who shot dead Traveller John Ward in 2005 – the appeal court ordered a retrial. Nally had been jailed for 11 months by Mr Justice Carney; the court of Criminal Appeal said the jury should have been allowed to consider the full defence of self-defence. Nally was later freed.

He has had a difficult relationship with the appeal court. In 1993, he suspended a sentence for the rapist of Lavinia Kerwick, a young woman who waived her anonymity to speak out about her case. There was public outcry and legislation was introduced to allow the DPP to appeal sentencing.

In March 1993 , at the end of the week of the trial, he was arrested outside the Shelbourne Hotel when seeking a drink after closing time. He subsequently apologised, saying he was “sorry for the trouble caused to the hotel staff and the gardaí”. He was not prosecuted.

By 2000, having experienced some of these appeals, Mr Justice Carney accused the DPP of being “trigger-happy”.

Among his most controversial decisions was one made in January 2013, when he sentenced Patrick O’Brien from Bray, to 12 years in jail, with nine suspended, for the rape and indecent assault of his daughter Fiona Doyle over a 10-year period. He then granted O’Brien, who was in ill-health, continuing bail pending appeal. The decision caused an uproar; later that same week, the judge apologised to Ms Doyle and revoked bail for her father. The appeal court subsequently endorsed his 12-year sentence, but only suspended three years of it.

In 2007, Mr Justice Carney gave Adam Keane from Co Clare a three-year suspended sentence after he was convicted of raping local woman Mary Shannon. The appeals court increased the sentence to 10 years, with the last three suspended.

In 1999, he gave a 10-year sentence to former nun Nora Wall for the rape of a school girl. Her conviction was overturned on appeal.

In 2008, the murder conviction of Warren and Jeffrey Dumbrell of Inchicore was deemed unsafe by the appeals court after Mr Justice Carney, who was the trial judge, had given a speech at a law seminar that mentioned stabbings and sentencing policy while he was presiding over the case.

Practitioners, though, have perceived the bulk of his decisions as fair. Around the courts, he has been highly respected. One barrister described him as “extremely just”. “I always got a fair trial before him; he wasn’t afraid to exercise judicial power, but judiciously,” he said.

Another barrister recounted how, on one occasion, he left the courtroom fuming, believing the judge had not been listening to him. “Lo and behold he ruled in my favour, so he was,” he said.

It is not surprising, given the more than 150 high-profile murder and rape trials Mr Justice Carney has handled over the years, that he has been perceived as controversial.

Some of his decisions around sex crimes have been particularly contentious, but as a leading expert in Irish criminal law, he has also been regarded as a steady hand on the tiller of justice.

He will now be free to say what he wants to say, without the shadow of the court of appeal behind him.