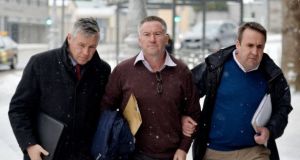 Michael Lynn (C): In one of the sample charges before the court, Lynn is accused of stealing €4.1m from Irish Nationwide. Photograph: Alan Betson

Former solicitor Michael Lynn who is accused of multi-million euro thefts will stand trial in January 2020.

Mr Lynn (49) with an address in St Alban’s Park, Sandymount, Dublin, is facing 21 charges relating to the alleged theft of almost €30 million from seven financial institutions.

Last March, Mr Lynn was extradited to Ireland from Brazil, where he has been living for several years.

Karl Monahan BL, defending, told Judge Martin Nolan at Dublin Circuit Criminal Court that his client has been in custody for some time. He said he was seeking the earliest possible trial date.

Cathleen Noctor BL, prosecuting, told the court that the trial is expected to last six to eight weeks.