In one incident he put a pillow on the child’s head and she passed out while he continued to have sex with her, court heard 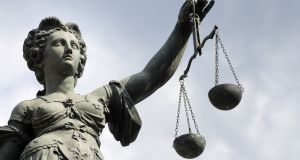 The offending came to light when the girl arrived home inebriated, having spent time drinking with the man. Her mother took her phone and found thousands of text messages between her and the man.

A UK resident who repeatedly travelled to Dublin to have sex with a teenage girl who he claimed he was in love with has been jailed for four and a half years.

The Central Criminal Court heard that the then 25-year-old man and the 16-year-old became engaged at one point and he told gardaí­ he was in love with her.

Mr Justice Paul Coffey said that it wasn’t love and the man was satisfying his sadistic urges by exploiting “a mere child”.

He met the girl online in mid 2016 and began travelling here to have sex with her. She was 15 when he first had sex with her and then continued to meet her for sex after she turned 16.

The pair met in hotel rooms and he recorded some of the sexual encounters on his phone. Mr Justice Coffey said the “clandestine nature” of the relationship between him and the victim indicated he knew what he was doing was wrong.

He said the defendant was controlling, possessive and manipulative and the victim only now has clarity as to how inappropriate the relationship was.

In a victim impact statement the victim said: “He was persuasive and demanding. I was 15 years old and he exploited this. I felt loved but realise this was not the case and he had control of me.”

Mr Justice Coffey said the fact that much of the sexual behaviour was elaborately discussed in text messages exchanged between them was evidence of premeditation and of the “grotesquely age inappropriate” nature of the relationship.

The man, with an address in Manchester, was charged with 67 offences. He pleaded guilty to eleven sample counts of serial defilement of a minor on various dates in 2016 and 2017.

He also admitted two counts of travelling with the purpose of exploitation of a child and one count of production of child pornography.

The defilement acts involved the man spitting on and slapping the victim and calling her a slut.

Some of the acts threatened the child’s personal safety including one incident where he put a pillow on the child’s head and she passed out and he continued to have sex with her. He told her that he had used her so much nobody else would want her.

Mr Justice Coffey imposed a five year prison term after allowing mitigation for his guilty plea, his expressions of remorse and his youth. He also noted the defendant has no other convictions and is held in very high regard in his community and described as “decent, generous, valuable member of society”.

He suspended the last six months of the sentence on condition that the man have no contact whatsoever with the complainant. He also ordered three years post release supervision if he chooses to remain here.

The offending came to light when the girl arrived home inebriated, having spent time drinking with the man. Her mother took her phone and found thousands of text messages between her and the man.

A garda witness told Caroline Biggs SC, prosecuting, that the video clips on the man’s phone amounted to child pornography.

In her victim impact statement the girl revealed she found it hard to trust people and build relationships. She said she had become more argumentative as she felt people were manipulating her, similar to what the man did.

She said she worried that the man knows where she lives and she was distressed about what he might do with the videos. She described him as being “persuasive and demanding” when recording these clips.

The court ordered the destruction of the man’s mobile phone, which was used to record the videos and takes photographs. These images were shared between the man and the victim.

The garda agreed with Michael Bowman SC, defending, that a huge amount of photos uncovered in the investigation were not sexual in nature.

He agreed these pictures depicted the two as a couple at different events and places from June 2016 to January 2017. The garda further agreed that at one point the two became engaged and an engagement ring was purchased.

Mr Bowman submitted that the images in texts exchanged between the parties were reciprocal.

Counsel said his client had been in custody for the past 19 months and had had time to reflect upon his wrongdoing.

Mr Bowman said his client’s “emotion overwhelmed his better judgement” in entering a relationship with the girl. Counsel asked the judge to take into account the former IT technician’s guilty plea, previously unblemished character and the testimonials handed into court on his behalf.

He told the court that after the offending came to light the child’s mother began to text his client. In one text message, which was not ultimately sent, the defendant wrote that “I’d do anything for your daughter even if that means serving a sentence. I realise I’m putting myself in danger and if you want to send details to police, fine.

In July 2017 he asked the child’s mother to meet him “face to face to explain his affection, to rescue the relationship”, Mr Bowman said. The mother arranged a meeting in Dublin city centre and informed gardaí who were waiting to arrest him. He has been in custody since and all sentences were backdated to July 15 2017.