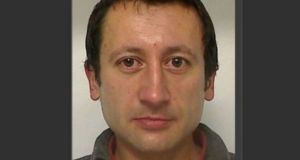 Michal Kurek, a homeless man with addiction difficulties, was found in the gateway of a country lane in Ballyboughal with 62 stab wounds to his body

A Central Criminal Court jury has found a man guilty of murdering his former flatmate, whom he stabbed 62 times - including 25 times in the back - before dumping his body in the gateway of a country lane in north Co Dublin.

The panel of seven men and five women rejected Sebastian Barczuk’s defence that the State had presented “less than half a story” and could not say when, where, why or how his homeless friend was killed. It was the defence contention that the prosecution was unable to point to a motive between the accused man and deceased, which they described as one of the biggest mysteries in the case as both were “like brothers” to each other.

Instead the jury accepted the State’s case that the defendant was “a proven and admitted liar” who was “kite flying” when he was initially interviewed by detectives before becoming a suspect in the case. In his closing speech, prosecution counsel Lorcan Staines SC with Carl Hanahoe BL asked the jurors to be very careful before they accepted the defendant’s narrative and “self-serving assertions”, which he said were used to “throw gardai off the scent”.

Barczuk (32), with an address at Briarwood Lawn, Mulhuddart, Dublin 15 had pleaded not guilty to murdering his homeless friend Michal Kurek (33) at a place unknown within the State between August 3rd and 4th, 2017.

Mr Kurek, a homeless man with addiction difficulties, was found lying face down in the gateway of a country lane in Ballyboughal with 62 stab wounds to his body, including 25 knife wounds to his back on the morning of August 4th. A Nokia 105 mobile phone was located in the right hand pocket of the deceased’s jeans and the handset was still powered on.

Evidence was given that a cyclist discovered the deceased’s body lying next to a gateway in the Grange area of Ballyboughal on the morning of August 4th. Former Deputy State Pathologist Dr Michael Curtis testified that the Polish national died from “multiple stab wounds and with a contributory factor of blunt-force trauma to the head and chest”.

The trial heard that the lower amount of DNA in a mixed profile taken from Mr Kurek’s Nokia phone matched the DNA of the accused man. Furthermore, the defendant’s phone made a data connection at a cell site near Ballyboughal in north county Dublin at 00.53 and 00.55 on the morning Mr Kurek’s body was discovered, while the deceased’s phone also used a cell site at Ballyboughal at 00.47 and 00.52 on the same morning.

The jury had viewed a montage of CCTV footage of a blue Fiat Punto travelling from the Clonsilla Inn at 9.18pm on August 3rd through Lispopple Cross in Co Dublin at 00.19 and past Drishogue in Oldtown, Co Dublin at 00.56 on the morning of August 4. Ms Ewa Raczka testified that on August 2nd 2017 - two days before the discovery of Mr Kurek’s body - she sold Barczuk a Fiat Punto.

It was the prosecution case that when one married the CCTV footage of the Fiat Punto being in north Co Dublin on the night with the cell site analysis then the jury was entitled to draw an inference that the accused had murdered his friend. Counsel for the State Mr Staines asked the jury to consider “when coincidence is placed on top of coincidence when does it become an affront to your common sense”.

The 12 jurors found Barczuk guilty of murder by a majority verdict of 11-1. They had deliberated for nearly 13 hours over four days.

Following Thursday’s verdict, Mr Justice Tony Hunt thanked the jury for their service and the attention they had given the case. “These are very difficult cases at the best of times and these are the best of times for reasons we all know,” he added. The judge said their service had been exemplary and noted the length of their deliberations and the questions they had asked.

Mr Justice Hunt exempted them from jury service for 15 years and said he hoped that they went away better informed as to how the legal system worked.

Barczuk made no reaction when the verdict was delivered.

Mr Justice Hunt will hand down the mandatory sentence of life imprisonment on November 2nd and remanded Barczuk in custody until that date. He adjourned sentencing after Mr Staines asked the court for a short period of time saying: “Contact has been made with the victim’s family in Poland and there may or may not be a victim impact statement”.