Former solicitor Michael Lynn in court ahead of trial next year 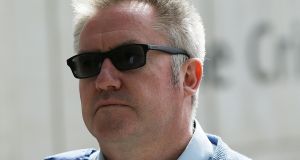 Former solicitor Michael Lynn who is accused of multi-million euro thefts was in court on Friday as part of preparations for his trial next year.

In another sample count, he is charged with stealing €3.6 million from Ulster Bank on October 20, 2006.

In March 2018 Mr Lynn was extradited to Ireland from Brazil, where he had been living for several years.

He was taken into custody in Brazil in August 2013. In June last year he was granted bail on an independent surety of €100,000.

Mr Lynn appeared in court on Friday when John Berry BL, prosecuting, told the court that the Director of Public Prosecutions (DPP) had now completed 56 categories of disclosure sought by the defence.

Counsel said there were some outstanding matters and asked the court to fix a date for a one hour hearing.

Padraig Dwyer SC, defending, told Judge Patricia Ryan that a lot of work has being done “behind the scenes” by the defence lawyers.