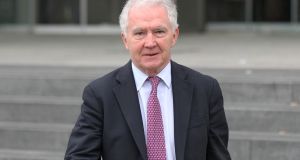 A former auditor of Anglo Irish Bank has told the trial of Sean FitzPatrick he was prepared to give the “unvarnished truth” even if it was contrary to the interest of the firm he works for.

It is the State’s case that multi-million euro loans taken out by Mr FitzPatrick (68) and his family were “artificially reduced” for a period of two weeks around the bank’s financial end of year statement by short term loans from other sources, including Irish Nationwide Building Society (INBS).

Dominic McGinn SC, prosecuting, previously told the jury that the case was about the alleged failure by the bank’s former chairman to disclose the extent of these loans to the bank’s auditors in the years 2002 to 2007. Mr FitzPatrick has denied all charges.

On day 86 of the trial at Dublin Circuit Criminal Court, Bernard Condon SC, defending, began his cross-examination of the prosecution witness Vincent Bergin. Mr Bergin is a partner with audit firm EY (previously Ernst & Young) and led the audit of Anglo for the years 2005 to 2008.

At 12.30pm, after just under two hours of questioning, Judge John Aylmer interrupted Mr Condon to indicate he could see that one juror was “struggling”. Judge Aylmer suggested an early lunch break.

The case was later adjourned to deal with a legal matter and continues on Friday.

Before this Mr Condon asked the witness if he be prepared to say something in evidence that might be contrary to the firm’s interests.

Mr Bergin replied: “If it’s the truth, yes”. He said he had sworn an oath and would abide by that.

Mr Condon told Mr Bergin he was the walking embodiment of EY for the jury. Mr Bergin said he would “probably” say he did not see himself as giving evidence as a representative of the firm.

“Personally I’m never sure. I’m the person who led the audit but the firm was the auditor. A person has to give evidence so I’m giving evidence,” he said.

He told counsel that he would be prepared to say “we didn’t do that exactly right, we could have done better” if that was the case.

He said he was aware that what he might say in evidence in this trial might have consequences for the firm, for Mr FitzPatrick and for him.

The jury heard that in 2012 Anglo Irish Bank, by then renamed IBRC, began litigation against EY and that EY was also the subject of proceedings with CARB, the Chartered Accountants Regulatory Board.

Mr Condon asked the witness about the “unorthodox and illegal” process by which investigators from the Office of the Director of Corporate Enforcement (ODCE) took a statement from him in 2010.

Mr Bergin agreed that solicitors from A&L Goodbody, the law firm representing EY, were involved in producing the statement along with ODCE investigators.

“The problem here is we don’t have the unvarnished Vincent Bergin view because everybody else has been sticking their nose in,” counsel asked.

Mr Bergin said he was here in court “to give the unvarnished truth”. Counsel replied: “Well, you’re not really, because you’ve read your statement”.

Mr Bergin said he had looked very carefully at his witness statement and would not have signed it off as his statement if he did not agree with all of it.

Mr FitzPatrick of Whitshed Road, Greystones, Co Wicklow has pleaded not guilty to 27 offences under the 1990 Companies Act. These include 22 charges of making a misleading, false or deceptive statement to auditors and five charges of furnishing false information in the years 2002 to 2007.