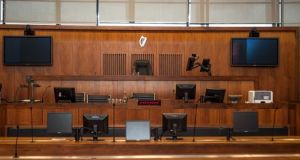 The 66-year-old convicted of the offences has denied the charges and said he plans to appeal the jury verdict and sentence.

A man who raped his son from the age of six years old and locked him in a box in their Waterford home has been jailed for 14 years.

There was no reaction from the 66-year- old as the sentence was read out at the Central Criminal Court..

He continues to deny the offences and has said he will appeal the jury verdict and sentence.

Mr Justice Robert Eagar said the child had “clearly convinced the jury of the spirit of the truth of the allegations”.

The child was taken out of the home by social workers in 2011, just before his eighth birthday and placed in foster care where he was further sexually abused by a child.

In his sentencing remarks the judge said it was not wise to put the boy in the foster home where he was sexually abused. He said it was “quite clear” there was a large amount of sexual abuse occurring in the house.

Mr Justice Eagar imposed a 15-year sentence on the father and suspended the final year.

The man has already been registered as a sex offender and will also be subject to a four year supervision order on his release.

The judge said it was the man’s right to fight the trial and to appeal the verdict but took into account the effect the trial had on the child.

He noted the boy became verbally aggressive before the trial and had trouble sleeping.

The boy was not allowed speak to his therapist during the trial because of the rules of evidence.

The judge also noted a psychiatrist’s report which stated child sexual abuse can led to many physical and mental ailments in the future. These risks are increased when the abuse is carried out by the father, he said.

He noted there boy enjoyed some pleasant times with his father but that these were negated by the ongoing abuse.

A jury convicted the father, who is from the UK, of nine counts of raping his son from the age of six years old and one count of child cruelty. He was acquitted of raping the child with a poker.

His 38-year-old partner, who is also from the UK, was convicted of child cruelty but found not guilty of sex assault relating to allegations she had sex or simulated sex with her child when he was between six and seven.

She will be sentenced next week.

Both parents had pleaded not guilty to the offences which occurred between 2009 and 2011 in their home. The parents had originally faced a total of 82 charges but 60 of these were withdrawn following legal argument.

In a victim impact statement read to the court, the now 13-year-old boy wrote that “when I lived with my mam and dad I wanted to dispose myself of this world, I wanted to commit suicide.”

It wasn’t until he was taken into foster care that his childhood started, he wrote.

The boy is currently in specialised care in the UK. He wrote that when he first arrived in the UK he asked to be called by a different name because he was worried his father would find him.

He referred to his father as “Adolf Hitler” and said he wanted to “run him over with a combine harvester”.

“Words have not even been invented yet for what my dad has done to me,” he wrote.

“I want to say au revoir to my memories. I would like my dad never to leave prison. I am happy when he is in prison.”

The boy continued: “Now that dad is locked up I would walk over to Ireland without a care in the world.”

He said he wants to return to Ireland to become a police officer and write a book about his life. He would like to meet his father in the future to ask him why he abused him.

In a previous victim impact report relating to his mother the child said he doesn’t believe she did anything wrong.

The boy called his mother a “kind woman” who he felt sorry for but wished that she had taken him away or placed him in care when the abuse started.

A psychological report stated the child is two years behind in school and has difficulties forming relationships.

He was removed from the family home in 2011 and placed in a foster home where he was sexually abused by another child. This child was never prosecuted because he was below the age of criminal responsibility.

In March 2012 he was moved to another foster home where he was very happy. He began disclosing the sexual abuse by his father to this foster mother who documented it and handed it over to gardaí.

The foster mother “loved the child to bits” the court heard but was forced to give up care of him because he was displaying disturbing behaviour. He was spying on her in the shower, acting inappropriately with other children and was obsessed with faeces.

Tusla, the Child and Family Agency, were forced to put him in specialised residential care in the UK as no suitable place was available in Ireland.

The psychologist said he was displaying highly sexualised behaviour but this has improved over time.

The father was convicted of anally raping the child on nine occasions but acquitted of raping him with a poker. Other charges relating to allegations that the father forced the boy to have sex with his mother were withdrawn from the jury.

The boy described one occasion where his father was assembling a wooden box. He asked his father what it was for and the father replied “it’s for you” before pushing him in. The boy was in there for three or four hours before his mother released him.

The defence submitted this comprised the child cruelty charge. However the prosecution contended the charge encompassed a wider “catalogue of horror” including showing the boy pornographic material.

Defence counsel Colman Cody SC said his client intends to appeal the conviction and does not agree with the jury’s verdict.

He said the man has six previous convictions for theft and drink driving but none for violent or sexual offences.

Mr Cody submitted that the maximum sentence of life imprisonment is reserved for only the most exceptional cases “involving particular violence or depravity”.

He said these characteristics are absent from this case.