‘I will never forget seeing my beautiful mother lying on the floor. It will haunt me forever’ 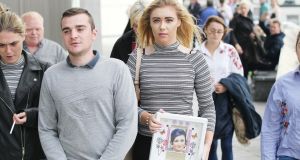 Jade Maguire gave a victim impact statement at the Central Criminal court where her father Danny Keena was given a life sentence for murdering her mother Brigid Maguire. Photograph: Collins Courts 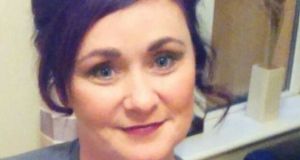 A Co Westmeath man has been handed a life sentence for murdering the mother of his children, who’ve said they will never forgive him.

Jade Maguire, who found her mother’s body in a sight that will “haunt me forever”, has testified that Danny Keena was not thinking of them when he murdered their “beautiful mother”, Brigid Maguire.

She advised other domestic abuse victims to seek help so that they wouldn’t end up like their mother.

Keena of Empor, Ballynacargy strangled his partner of 25 years in her new home on November 14, 2015, two months after the 43-year-old and their two teenaged children had left him.

The 55-year-old farmer had pleaded not guilty to murder, but guilty to her manslaughter at her new home on Main Street, Ballynacargy.

He claimed she had provoked him by telling him he was a bad father to their then 12-year-old son. However a jury convicted him of murder on Monday following his Central Criminal Court trial.

His daughter Jade Maguire entered the witness box during his sentencing hearing on Friday morning to deliver a victim impact statement on behalf of her family.

“On the 14th of November 2015, our lives changed forever,” she said. “Our dear, beloved mother was cruelly taken from us.”

She said their mother’s murder had left “a huge void” in the family’s lives.

“Things will never be the same for us or the small community of Ballynacargy,” she said.

She described her mother as a “full of life” and a “kind, caring, religious person, who put the needs of others before herself”. She had loved her work in Mullingar hospital, helping both patients and visitors.

She had loved her children so much, she added.

“Our Mammy had the most beautiful smile,” she recalled, noting that they would now see it only in photographs.

She said that they could not sleep and that, when they did, they woke with scary dreams.

“I will never forget seeing my beautiful mother lying on the floor,” she said. “It will haunt me forever.”

She said they were full of anger, hurt and grief, which time would never heal.

“We will never forgive Danny Keena for what he has done,” she said. “He never thought of (us) when he murdered our beautiful mother.”

She said that, even with the guilty verdict, there was no joy.

“It will never bring our beautiful mother back,” she concluded.

Mr Justice Patrick McCarthy then imposed the mandatory life sentence on her mother’s murderer, as prescribed by law. He backdated it to 17th November 2015, when he went into custody.

Keena showed no emotion as he was led away by prison officers.

Jade Maguire then spoke briefly outside the courthouse, saying the family was relieved to get justice for her mother.

“Sadly, it won’t bring Mammy back,” she noted.

“I would like to advise anyone else, who is suffering from domestic abuse, not to be afraid to seek help as soon as possible so you won’t end up like my mother,” she warned.

She thanked Mullingar Gardaí­ for their support and hard work, and thanked the jury for “seeking the truth”.

The trial heard that Keena had previously strangled the victim to the point where she had stopped breathing. However, the jury did not hear this evidence, which was contained in the statement of a witness read out during legal argument. Instead, the jury heard his own admission that he had previously “choked” her to the point of dizziness.

The trial heard that the accused and deceased had been a couple for 25 years and had two children. However, the relationship had become abusive, with both children testifying to seeing their father being violent with her.

Jade Maguire, who had found her mother’s body, recalled an occasion when she and her younger brother were forced to defend their mother from their poker-wielding father.

She said the accused had first been waving a hammer into her mother’s face, shouting that he was going to kill her.

“She was very afraid and she had marks on her neck,” she said.

His children had tried to calm him and he had put the hammer down and left the room. However, he had then returned with the poker, she said.

“That night we tried to leave, and were outside but he tried to stop us with a baseball bat,” she added, explaining that they eventually moved to a house in the nearby village of Ballynacargy.

Her younger brother gave emotional evidence via live television link due to his young age.

He recalled an incident of abuse that he found extremely upsetting.

“My mother got her hair done and he just came with the milk and spilled it all over her hair and she’d done nothing to him,” he said. “I told her I hated him for what he did, for what he would be doing to her.”

He said he used to ask his father, whom he described as a bully, why he had to take everything out on his mother.

He also explained that they had tried to leave him before.

He said it was good to get away.

“Mammy was happy,” he said. “But, he started threatening her again. He used to call into the house.”

The accused man’s sister, Mary Wallace Snr, told the jury that he had once told her that he had choked Ms Maguire.

However, her garda statement, which was read out in the jury’s absence went further.

“Danny said: ‘I pushed Bridgie. I thought I was after killing her’,” she’d stated. “He said he was going to kill her.”

‘Choked with his hands’

She’d said that he’d also told her that he’d choked her with his hands.

She also said that she had spoken to the deceased about that incident.

Mrs Wallace agreed in court that this statement was true and accurate. However, it was not disclosed to the jury.

That witness’s daughter, Mary Wallace Jnr, testified that he had told her that if he met his partner on the road, he would run his car into her before taking his own life.

The only account of what happened on the night of the killing came from the accused during his garda interviews.

He said that it had come to his attention that their son had been absent from school and so he went to Ms Maguire’s new home to discuss it.

He said they had argued and that she had told him he was no good to the children and that’s why they had moved.

He told gardaí that she was always sending and receiving messages on Facebook when they had lived together. He complained that she was doing the same that evening, and her phone records showed intimate communication with a male at that time.

“I said: ‘You’re some mother to them, whoring in around Mullingar, I was vexed at this stage,” he said, explaining that he had followed her up to her bedroom.

“Next a text message came on the phone. I said: ‘That must be your f***ing partner in Mullingar. You must be going to meet him’,” he told detectives.

He said she had told him it was none of his business.

“With that, she jumped out of the bed and came for me really violently. She was vexed,” he said. “She had her two hands out into my face. I put my two hands out to block her.”

He said that he moved his hands onto her neck.

He put his two hands around an interviewing garda’s neck to show him how he was holding her.

“What were you doing there?” he was asked.

“Choking her,” he replied.

“She fell to the ground,” he continued. “Her tongue was all blue. She was fighting for her life at that stage. I knew the damage was done.”

He said she had told him that she was dying and he said that he could hear her gurgling.

He said that he had applied “a good bit of pressure”, but said he hadn’t meant to kill her.

“I knew I was after killing her and that’s when I panicked,” he said.

The defence had asked for a verdict of manslaughter rather than murder by reason of provocation.

“She told me I was a bad father,” were the first words he had uttered when the local sergeant arrived at the house where he’d turned up after 24 hours on the run.

“It’s probably one of the most hurtful things you can say to a man,” suggested his barrister, Colm Smyth SC, in his closing speech. “It brings into question everything a man stands for.”

The prosecution pointed to the evidence that the accused had previously strangled her and threatened to kill her.

Remy Farrell SC said he had clearly intended his actions.

“He stared at her, presumably face to face, for a period of time and literally strangled the life out of her,” he said.

The jury reached its majority verdict of 11 to one after four hours and 55 minutes spent deliberating.