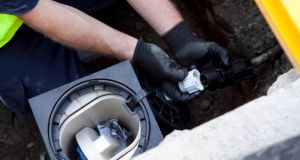 The High Court has granted orders to a company which establish a 20-metre exclusion zone around locations in Dublin city where workers are installing water meters.

GMC Sierra Ltd, which has a contract to install meters at various locations in Dublin, last month secured injunctions preventing a number of individuals or anyone with notice of the orders assaulting, intimidating or interfering with the installations.

Those orders were obtained after the company said its workers had been harassed and threatened while installing meters in the Dublin 5 and Dublin 13 areas. On Wednesday the company sought an additional order establishing the 20-metre zones around its work stations arising from what it described as an escalation of unlawful activity by protesters.

Lawyers for several protesters alleged to have breached the October injunctions opposed the application for the exclusion zones.

The protesters denied any wrongdoing and argued they are protesting against installation of the meters in a lawful and peaceful manner, their lawyers said.

Mr Justice Paul Gilligan said he would grant an order preventing protesters on a public road or footpath going within 20-metres of those sites where GMC’s employees are carrying out installation works.

The judge said he was going to take a common sense approach to the matter and said the order does not apply to residents of the relevant roads or to those going about normal daily business such as people making deliveries.

He also granted orders preventing protesters blocking GMC’s vehicles from accessing or leaving sites where they are carrying out works.

While people have a constitutional right to protest, such protests must be conducted lawfully and the evidence to the court, including video evidence, showed the company’s attempts to install meters was being “seriously impaired”, he said.

The video evidence taken at protests in October appeared to show “a significant deviation from lawful protesting” while other evidence seemed to suggest workers were being intimidated, assaulted and had been followed home, he said.

The injunction allowing establishment of the 20-metre exclusion zone applies pending the final outcome of the action. The court was packed with anti-water charge protesters who, after the judge gave his ruling, began to jeer loudly and verbally abuse lawyers for the company.

GMC Sierra sought the fresh orders after claiming protests had escalated with the effect it was unable to meet its target of meter installations. Workers had been threatened, harassed, spat at, racially abused and in instances were followed home by protesters, the court was told. Equipment and machinery used by the company had been damaged, it was also stated.

Some of the protest activities raised health and safety issues and it was feared a protester, worker or member of the public could get seriously injured, it was claimed.

Jim O’Callaghan SC for GMC said the case was not about whether charging for water is right or wrong but about protecting the rights of his clients’ workers. In one incident last month, workers were prevented working at or leaving a site for 14 hours by protesters, he said.

Lawyers for some of the respondents opposing the 20-metre exclusion zone argued it was a disproportionate interference with their rights. John Berry Bl, who represented seven individuals alleged to have breached the original court orders, said imposition of the zone would have the effect of “closing the roads” but Mr O’Callaghan disputed that.

The company’s application for other orders, including possible jailing orders for alleged contempt, was adjourned for two weeks to allow the respondents lawyers seek clarification about legal aid issues.