Teenager who rescued nephew from Carrickmines fire ‘lucky’ to survive

Chip pan of oil on cooker was the definitive cause of blaze which killed 10, jury told 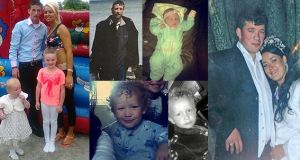 The teenager who rescued his nephew from a blaze that killed ten people was ‘extremely lucky’ to survive, the Dublin Coroner’s Court has heard.

John Keith Connors had a “tiny window” of opportunity to enter the burning mobile home and rescue Tom Connors (4) at a halting site in Carrickmines, Co Dublin on October 10th, 2015.

He grabbed the child seconds before a “flashover scenario” occurred as a chip pan of burning oil boiled over creating an inferno that engulfed the entire dwelling.

Chartered fire safety engineer David O’Connor told the court that the timeframe within which anyone could be rescued from the burning unit “very small”.

“The flashover scenario created temperatures of between 500 and 600 degrees celsius in the unit, with hot gases, smoke and carbon monoxide. It was a very small time frame available to do that intervention.

“It was extremely lucky they could do it at that time, another minute and they would not have been able to survive the conditions,” Mr O’Connor said.

The mobile, a former portacabin that had been used as a security shed, was significantly more vulnerable to fire than a modern house, the court heard.

The exterior of the dwelling was made of metal lining from the which the heat could not discharge, Mr O’Connor said. He said a 38mm layer of polystyrene in the walls would have increased the burn temperature of the fire.

“This became the equivalent of the articulated truck on fire,” he said.

“If it was timber, the timber would have failed and the heat escaped. But this type of construction made for a significant fire event.”

The fire spread to another mobile located less than one metre away.

The dwellings were the responsibility of the occupants, Mr O’Connor told the court.

He noted that under Department of Environment Guidelines for Traveller Accommodation (1998) there should have been at least six metres between dwellings on the site.

The guidelines note that “temporary” sites providing Traveller accommodation should not exceed periods of more than five years. The Glenamuck Halting Site had been established as emergency temporary accommodation by Dun Laoghaire Rathdown Council in 2008. It was technically exempt from guidelines and regulations because it was an emergency provision, the court heard.

Safety guidance issued in the wake of the fire, on December 2nd, 2015 compiled by the National Directorate for Emergency Management advise the provision of escape windows and where a minimum distance of six metres between units is unavailable, a firewall should be installed.

“The fabric of the units by nature are more vulnerable to fire spread and fire growth,” he said.

The jury heard the chip pan that caused the fire was sitting on a hot plate powered on to the highest setting.

The cooker was relatively new and there were no electrical faults detected, the inquest heard. There was no isolator switch for the cooker installed in the kitchen.

Asked by the coroner if this was the definite cause of the fire, Mr Collins replied it was.

“In our belief this definitely caused the fire,” he said.

Mr Collins investigated the cooker after the fire on behalf of Gardaí.

“The rear hot plate was full on. All that was left was the spindle. The position of the spindle indicated the cooker had been turned on to the full position,” he said.

CCTV footage revealed the fire started at 4.15am. Dublin Coroner’s Court heard that within minutes, the inferno had spread through the entire unit. Emergency services arrived at 4.34am. The second mobile home caught fire between 4.34am and 4.38am.

Thomas Connors (27), his wife Sylvia (30) and their sons Jimmy (five) and Christy (three) were recovered from the main bedroom of the mobile home after the fire. Willie Lynch (25), his pregnant partner Tara Gilbert (27) and their two daughters Jodie (nine) and Kelsey (four)were recovered from a second, smaller bedroom. Jimmy Lynch (39) a brother of Willie Lynch, was removed from the kitchen area, near the seat of the fire. Baby Mary Connors (six months) daughter of Thomas and Sylvia Connors, was pronounced dead in hospital.

An inquest into all ten deaths continues on Monday with pathology evidence from Deputy State Pathologist Dr Margaret Bolster.