Patrick Hutchinson (50), a father-of-six from Ballymun, died after being struck last July 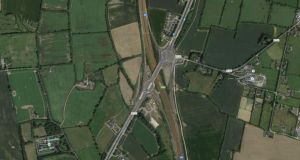 Satellite image of Junction 4 on the M1, where Patrick Hutchinson is believed to have entered the motorway before being fatally struck by a car. A sign indicating cyclists should not enter the motorway may have been removed during road works at the time, his inquest heard. Photograph: Google Street View

An intoxicated cyclist was fatally injured when he cycled onto a motorway in error and was hit by a car, an inquest has heard.

Patrick Hutchinson (50), a father-of-six from Ballymun in north Dublin, died at Beaumont Hospital within hours of being struck by the car on the M1 motorway on July 27th last year.

Dublin Coroner’s Court heard he cycled across three lanes in front of oncoming traffic before being struck. He had spoken to his sister by phone shortly beforehand telling her he was “confused” and did not know how he had made it onto the motorway.

The inquest heard he was “heavily intoxicated” at the time. A sign indicating cyclists should not enter the motorway may have been removed during road works.

Mr Hutchinson was seen on his bike on the hard shoulder prior to the incident, which happened near the airport exit.

One witness, Niamh O’Connor, described how she was in the middle lane of the motorway when she saw Mr Hutchinson “veer” across on the bike from the hard shoulder before being struck by a car in the overtaking lane.

“It looked like he was thrown about 12 feet into the air,” she said. Her husband had to swerve to avoid Mr Hutchinson as he landed in the middle lane in front of their car.

The driver of the vehicle that struck Mr Hutchinson, Derek Canning, said he did not see him. “A split second, a blurry figure came on the passenger side and bang,” he said.

Forensic collision investigator Garda Edward Davin said traffic would have made it difficult for Mr Canning to see the cyclist coming.

The car was travelling at a minimum of 97km/h when the incident happened.

Coroner Dr Brian Farrell said Mr Hutchinson, who was conscious but disorientated after the incident, was taken to Beaumont, where he died on the operating table.

The pathologist gave the cause of death as multiple injuries. The toxicology screen found a “very high” level of alcohol in his system, which the pathologist described as “toxic”.

Mr Hutchinson is believed to have entered the M1 at Junction 4, where works were being carried out at the time. A sign indicating cyclists are prohibited from entering the motorway may have been temporarily removed, Garda Davin told the court.

“Most people would be aware of the fact that cyclists are prohibited from using motorways,” he said.

Issues were raised about signage at the Junction 4 slip road onto the motorway, where cyclists and pedestrians are directed to use a tunnel underneath the road.

Speaking from the body of the court, Mr Hutchinson’s sister Sandra said she had spoken to him on the phone when he was on the motorway.

He told her he was “confused” and did not know where he was or how he had gotten onto the motorway.

His son Daniel Hutchinson said gardaí­“should have been patrolling the motorway” and taken his father off it.

The jury returned a verdict of death by misadventure and recommended that Fingal County Council completely review signage at Junction 4.