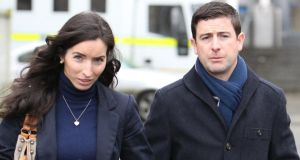 Amy Delahunt and her partner Oliver Kelly leaving Limerick Coroners Court where the inquest into the death of their daughter Mary Kate Kelly is taking place. Photograph: Liam Burke/Press 22 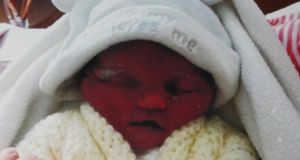 A photograph of Mary Kate supplied by her parents. Photograph: Liam Burke/Press 22

A pregnant woman whose baby died the day after she was sent home from the Midland Regional Hospital in Portlaoise, should have been admitted for further observation and steroid treatment, the doctor who treated her has accepted.

Amy Delahunt from Borrisoleigh Co Tipperary, wept as she recounted the events leading up to the stillborn birth of her daughter Mary Kate Kelly at the Maternity Hospital in Limerick, on May 28th, 2013.

At an inquest into the baby’s death a consultant at the hospital in Portlaoise also agreed under cross examination that Ms Delahunt should never have been sent away.

While she was a patient in Limerick, Ms Delahunt presented to the Midland Regional Hospital with concerns over reduced foetal movement as it was the closest hospital to her place of work.

The other baby deaths had an number of themes in common with Mary Kate’s case, including the CTG trace, and the failure to refer the mother to a Consultant.

“If I had known what I know about Portlaoise now I wouldn’t have gone next nor near the place,” Ms Delahunt told the inquest.

Before commencing her difficult evidence, the heartbroken school teacher asked if she could pass around a photo of Mary Kate “so everyone knows why we are here”.

Her partner Ollie Kelly also broke down during his evidence.

“When we sat down and found out about the other cases it devastated us. To find how that other babies died and lessons hadn’t been learned ... We were led to believe we were the only ones but there were four more,” he said.

“If they (lessons) were learned, our little girl would be here.”

Ms Delahunt told the inquest how she and her partner had been trying for many years to start a family and were overjoyed when they finally conceived with the help of fertility treatment.

After breaking the joyful news to their families on Christmas Day 2012, the pregnancy continued as normal until 34 weeks, when Ms Delahunt became concerned about lack of foetal movement.

She described Mary Kate as very active from very early on in the pregnancy especially on hearing her father’s voice.

On May 21st, 2013 Ms Delahunt went to the Maternity Assessment Unit (MAU) in Portlaoise hospital, located five minutes from the school where she works as a secondary teacher as she was worried about her baby.

She was monitored on CTG, a cardio monitor which gives a trace or graph of the baby’s foetal movements, and an ultrasound was carried out.

Registered midwife Sally Hanford told the inquest how she aired her concerns to the on call Registrar Dr Chuck Ugezu about three unprovoked decelerations in the foetal heart rate as picked up in Ms Delahunt’s CTG trace.

Dr Ugezu said it was unnecessary to repeat the trace which he said was normal at 34 weeks gestation and he performed an ultrasound scan.

Ms Hanford – who had to leave the overcrowded assessment unit on a few occasions to look for more staff – said she told Dr Ugezu he could not stand over the trace and they needed to contact consultant obstetrician Dr Miriam Doyle who was on duty in the maternity ward to review the trace.

When the midwife returned to the MAU, Ms Delahunt had been discharged and told to keep a check of foetal movements overnight, ahead of her scheduled anti natal appointment in Limerick the following morning where she was a patient.

The mother described the devastating moment she and her partner were told by midwives in Limerick the following day that they could find not find a heartbeat on the scan, and that’s when she knew their much wanted baby girl was gone.

“I just wanted them to deliver the baby straight away. I didn’t want to be carrying around a baby bump with a dead baby inside and people thinking I was going to have a healthy baby.”

At 34 weeks into her pregnancy Ms Delahunt thought she was in the safe period and the baby they had fought so hard for was “nearly here”.

In his evidence, Dr Chuck Ugezu a former registrar at Midland Regional Hospital in Portlaoise, apologised if he ever suggested that Ms Delahunt left the hospital against medical advice and for any upset he caused the couple.

In an addendum to his original deposition he also acknowledged he should have insisted she be admitted on the day she presented at Portlaoise, for further observations and for steroid injections and further CTG traces.

On reviewing the CTG trace he admitted there were some significant findings, but said he had discharged Ms Delahunt knowing that she had an ante natal appointment in Limerick the following morning.

Consultant Obstetrician Dr Miriam Doyle said she had no recollection of Ms Delahunt on May 21st 2013 or speaking to Mid Wife Hanford about her case.

Dr Doyle accepted in principle that Ms Delahunt should have been admitted.

She also agreed under cross examination by SC David Holland that had her mother been kept in hospital Mary Kate Kelly would have been born alive, although it was uncertain how healthy.

The inquest continues on Wednesday.