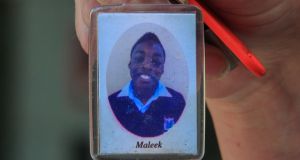 A photograph of Maleek Lawal on a keyring is shown following an inquest on Wednesday into his death in October 2016. Photograph: Gareth Chaney/Collins.

A coroner has urged parents of children with food allergies to carefully check the ingredients of food after a 10-year-old boy suffered a fatal allergic reaction to a McDonald’s chicken wrap.

His mother, Rukawat Lawal, told coroner Dr Myra Cullinane that Maleek loved McDonald’s food and always asked for it as a treat.

She said she was pregnant with Maleek when she arrived in Ireland from Nigeria seeking asylum in 2006. He was diagnosed with asthma and eczema as a young child and was advised to avoid milk, eggs, fish and nuts.

On the day he died, Ms Lawal had taken her three children to get haircuts after school.

Ms Lawal left her sons in the barber shop at the Ilac Centre and went with her daughter to McDonald’s where she ordered burgers, chicken nuggets and a peri peri chicken wrap. Maleek had eaten hamburgers and nuggets before but never the peri peri wrap, the court heard.

“He ate the whole wrap. Within 10 minutes he began to feel ill. He asked to go to the toilet. In the toilets he said ‘Mam I’m feeling weak, I can’t walk’,” Ms Lawal said.

The court heard Maleek’s lips and face swelled up and that Dublin Fire Brigade was called to the scene at 5.50pm. However, Maleek was not breathing when they arrived and was rushed to Temple Street Children’s Hospital, where he was pronounced dead at 7pm.

Pathologist Dr Deirdre Devaney gave the cause of death as acute anaphylactic shock in a boy with a known allergy to milk, eggs and fish. The wrap contained milk, the court heard.

Dr Aideen Byrne, a pediatric allergy specialist at Temple Street, said a skin test performed in March 2016 showed no resolution of Maleek’s allergies and she advised ongoing avoidance of milk, fish and eggs.

Ms Lawal received two auto-injectors and was advised to carry them at all times in case of anaphylaxis. Training on the use of the injectors was given by Maleek’s dietary team at Temple Street.

McDonald’s employee Kerry Byrne served Ms Lawal the food and that there was no query about ingredients. Asked if information on food allergies is supplied by McDonald’s, Ms Byrne said it was available by the till.

Speaking after the verdict, Ms Lawal said Maleek was “a beautiful, playful boy” who loved to read.

“My heart is truly broken for him. I would not wish this pain of losing him on my worst enemy.”