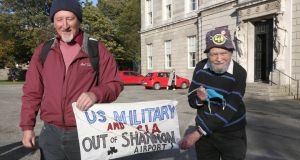 Two peace activists who allegedly spray-painted red crucifixes on the runway of Shannon Airport have been acquitted of unlawful criminal damage.

Colm Roddy (78) and Dave Donnellan (60) were alleged to have cut through the airport perimeter fence to gain entry to the airfield and to have then painted crucifixes on the runway.

Mr Roddy of Bayside Walk, Dublin and Mr Donnellan of Reuben Street, Rialto, Dublin were stopped on the runway after walking around the airfield for about 45 minutes. They had walked towards a US Learjet and asked army and Garda officials guarding the plane to search it.

Both men told the jury that their actions on the day were a protest against the use of Shannon airport by US military. They assert that the presence of US military planes and troops is a breach of Irish neutrality and has, according to international law, turned the airport into a legitimate target for enemy combatants of the US.

Both men had pleaded not guilty to criminal damage without lawful excuse of the fence and runway at Shannon airport on May 5th, 2016.

After a nine-day trial at Dublin Circuit Criminal Court the jury of eleven men and one woman took a little under two hours to return unanimous verdicts of not guilty on the two charges.

Judge Karen O’Connor thanked the jurors for diligently carrying out their duties especially in the midst of a pandemic. She also thanked the defendants, who had represented themselves, and their lay legal advisors, for their courtesy and dignity throughout the trial.

Directions to the jury

Judge O’Connor had earlier directed the jury that the offence of criminal damage allows for a defence where an accused acted in order to protect himself or another.

The trial heard that Mr Donnellan told gardaí­ that his actions were a faith-based peace action to protect human life. Mr Roddy told gardaí: “I had lawful excuse, I was trying to prevent a much greater illegality which is going on in Shannon Airport”.

Judge O’Connor told jurors they must decide if the behaviour of the defendants was reasonable in the circumstances as each of them believed them to be.

“You must decide whether they believed their actions to be justified. It does not matter if the belief is justified or not, as long as Mr Roddy and Mr Donnellan honestly hold the belief,” ” she said.

She noted evidence that Mr Roddy told gardaí­ that he came to the airport to act according to his conscience and “sense of duty to fellow human beings”, to “try to stop damage . . . to innocent lives”.

She reminded the jury that Mr Donnellan told gardaí “our faith-based intention is the prevention of further loss of life”. She said the onus is on the prosecution to prove beyond a reasonable doubt that the excuse given by the defendants was not a lawful excuse.

The prosecution could not give a closing speech because of a legal rule which applies when the defendant is a lay litigant and does not call any witnesses.