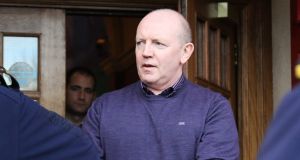 PearseMcAuley, one of the convicted IRA killers of Detective Garda Gerry Mc Cabe, is back in jail after being sentenced to 12 years in prison for a frenzied attack on his estranged wife.

The assault causing harm on Pauline Tully McAuley happened on Chrismas Eve last year at the home they once shared in Kilnaleck, Co Cavan.

Judge John Aylmer, at the sentence hearing at Cavan Circuit Court, said the facts in relation to what happened on that date were given in great detail at a previous hearing and were reiterated most capably and bravely by Ms Tully McAuley in her victim impact statement. She had been stabbed 13 times with a knife McAuley pulled from his pocket and sustained four broken fingers.

The judge sentenced McAuley to 12 years in jail for the serious assault causing harm to Ms Tully McAuley but suspended the last four years upon McAuley entering into a bond to keep the peace and be of good behaviour for a period of four years uponhis release.

McAuley (50), who is originally from Strabane, but with an address in Ballyconnell, Co Cavan, faced a series of other charges, for which he was also sentenced, with all terms of imprisonment to run concurrently.

He was sentenced to three years imprisonment for the production of a knife in the course of a dispute at Kilderry, Kilnaleck, Cavan, on December 24 last year, six years for the false imprisonment of Ms Tully McAuley and four years for threatening to kill her brother Tommy Tully. The judge backdated all sentences to December 27th last year when Mc Auley was first detained.

With remission and taking into account the period he has already served on remand McAuley is expected to serve less than half the 12 years imposed by the court.

Details of the assault on Ms Tully McAuley were heard in court last Friday, with the case adjourned to yesterday for sentencing.

Prosecuting counsel Monica Lawlor outlined how McAuley and his wife had split up in February last year and he was living away from the family home at an apartment in Ballyconnell. She said on Christmas Eve morning last year he had made arrangements with his wife to meet their children at her home at 1pm. However, she said he had turned up at 11am unannounced and intoxicated and proceeded to attack her, accusing her of having another man in front of their seven- and five-year-old boys.

Ms Lawlor described McAuley repeatedly knifing his estranged wife as she lay on the kitchen floor in a pool of her blood during what became a two-and-a-half-hour attack.

She eventually crawled away and notified a neighbour who barely recognised her at first because of her injuries, she said.

The neighbour went to Ms Tully McAuley’s brother Tommy’s home and alerted him. Tommy Tully came upon McAuley, who had a boulder in his hands and was threatening the car which Ms Tully McAuley had locked herself into.

Ms Lawlor said Mr Tully then hit McAuley and McAuley threatened to kill him and his sister.

Ms Lawlor said a doctor’s report stated Ms Tully McAuley had a collapsed lung and blood in another lung along with multiple lacerations to her hands and neck.

Ms Tully McAuley told the court McAuley had threatened to kill her and she would be living in fear of her life for the rest of her days. She said the incident had a horrific effect on their two children. The older boy had in a nightmare seen his father cutting off her head. She said: “My youngest son has said he looked through the glass panel and witnessed his father putting the knife into me. Children should never have seen such things and they are both receiving counselling.

In her victim impact statement she said, “I am in absolute fear of him and fear that someday he will make another attempt on my life. I do not ever expect to enjoy a peaceful mind, but will live a life haunted by what happened to me.”

Judge Aylmer said McAuley had pleaded guilty on June 2 this year to four of the 11 counts . He said, “I would place this assault at the upper end of the scale.”

The Judge went on to say he had to consider a multiplicity of factors including credit for his plea of guilty at an early stage.

“Also I accept as genuine his remorse in particular to the assault causing serious harm to Ms Tully.”

Speaking on the steps of Cavan Courthouse after sentence was handed down Ms Tully said she was relieved and called on others in similar circumstances to “stand up for themselves”and speak out against domestic violence.

The former Sinn Fein County Councillor, said, “I just want to say, domestic violence is totally wrong no matter by who, or where it is perpetrated. I wouldencourage anyone who is a victim of domestic violence to do something about it, look for support, and stand up for themselves.” She also thanked all who had supported her saying, “I want to thank everybody who helped me along the way, my family my neighbours, my colleagues, my friends, the gardai, and the barrister and solicitor for the state.”

Recognisances were fixed in the event of an appeal.