Member of Hutch family jailed for breaking into Revenue offices 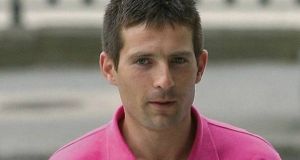 The court heard Alan Hutch was on protection in custody in a single cell and had formed certain views that the prison authorities were contaminating his food and water. File photograph: Collins Courts

A member of the Hutch family living in fear for his safety has been jailed for breaking into the Offices of the Revenue Commissioners and assaulting a man who tried to prevent him leaving.

Alan Hutch (36) was confronted by a staff member who found him in his office as he returned from a tea break. The man was punched several times by Hutch during violent scuffles as he tried to prevent him leaving with a stolen mobile phone. Gardaí were alerted and all property recovered.

The prosecuting garda told Dublin Circuit Criminal Court the Hutch name had been involved in a feud in the Dublin area.

“It’s an understatement, to put it mildly, that people are aware of the Hutch name,” said Derek Cooney BL, defending. He said there had been an orchestrated targeting of people bearing the Hutch name.

He said his client did not like to hear the phrase “dead man walking” but said it was something all members of the Hutch family had been faced with and it was something Hutch had to live with. He outlined that Hutch’s father, taxi driver Eddie Hutch, had been killed on the doorstep of his family home. Hutch received the news of his father’s murder through a phone call while in custody.

Hutch, who is a nephew of Gerry “the Monk” Hutch, and is from Portland Place, Dublin has 73 previous convictions including assault, robbery, burglary, threats to kill, endangerment, obstruction, and road traffic offences.

Judge Melanie Greally noted the burglary had developed into a violent struggle when Hutch was interrupted and his escape prevented. Mr Higgins suffered a number of blows during two scuffles.

Two of Mr Higgins colleagues came to his assistance and subdued Hutch until gardaí arrived.

Judge Greally noted Hutch has been in custody since the date of his arrest and is very isolated in prison, where he has become “paranoid” in relation to others including prison staff. She said he is “extremely fearful for his own safety and has substantial cause for that fear.”

She took into account his drug addiction and efforts to deal with it, as well as a psychological report which outlined he had been exposed to violence and criminality from a very young age.

The judge noted his guilty pleas were valuable as witnesses may have been fearful if required to give evidence in a case against him. She noted the circumstances associated with the current “feud” and said it was an “unimaginable situation for anyone to be living with on an ongoing basis”.

Judge Greally imposed a four year sentence and suspended the final 18 months on strict conditions. She backdated the sentence to the date of the offence when he went into custody.

During the sentence hearing Mr Cooney said Hutch was on protection in custody in a single cell and had formed certain views that the prison authorities were contaminating his food and water.

He handed a psychological report into court outlining his family circumstances. His upbringing was described as challenging, with Hutch witnessing violence inflicted on his mother, brothers and himself by his father.

He said that despite this, Hutch described missing his father and wishing he was around to “steady the ship” and get him back on the right path. Mr Cooney said his client began using cannabis at a young age, later progressing to heroin. He also became involved with criminality from a young age.

Counsel said Hutch has been addressing his addiction while in custody and when he gets out of prison he wants to assist his mother who cares for a younger brother with special needs.

He said that Hutch’s release will in effect be a “house arrest” as he cannot go out and walk the streets of Dublin.

Garda Gavin Feeley told Aoife McGillicuddy BL, prosecuting, that at about midday on March 7th, 2018 Hutch got into the Eir building through an unlocked door as maintenance was taking place.

He walked around the building for a time before going through another door into the adjacent Offices of the Revenue Commissioners. He walked upstairs and into the unoccupied office of Mr Higgins, who was on his tea break.

When Mr Higgins returned to his office he found Hutch in the office holding a white box containing his mobile phone and accessories. He shouted at Hutch, who put the box in his pocket and tried to leave the office.

Hutch ran at Mr Higgins who was in the doorway and a scuffle began in which they both fell to the ground. Hutch punched Mr Higgins in the face as they fell. Hutch got up and ran away.

Mr Higgins raised the alarm and followed Hutch who was attempting to open an inner door that was kept permanently closed. Hutch turned and ran back towards Mr Higgins, who shouted at him to drop the phone.

Hutch punched him in the face on at least two occasions in the course of another scuffle, during which Hutch grabbed a steel pole and pushed it onto “the neck or chest area” of Mr Higgins.

Two of Mr Higgins colleagues came to his assistance and they managed to subdue Hutch on the ground until security arrived. The phone in the white box was recovered as well as a second phone and a camera. Garda Feely was on duty nearby and was alerted by a staff member.

Hutch was arrested and answered “no comment” to all questions in garda interview. He has been in custody since his arrest.

The court heard Mr Higgins suffered bruising and tenderness to his cheekbone. There was no victim impact report.