Martin Guerin gets suspended sentence for having child pornography 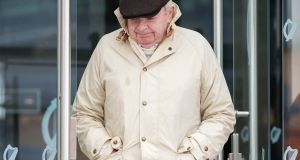 The judge sentenced Martin Guerin to two and a half years imprisonment, but suspended the sentence in it entirety on condition he keep the peace. Photograph: Collins Courts

Passing sentence on Wednesday, Judge Martin Nolan said that the court should consider a non-custodial sentence in cases of this nature in which there were no aggravating factors such as previous convictions. He said there were no aggravating factors in this case. Judge Nolan said the mitigating factors in the case were Guerin’s guilty plea, his co-operation with gardaí, his immediate admissions, his good work history and his lack of previous convictions. He said he could accept that

Guerin had been shamed by the situation and it had caused marital disharmony. He said Guerin was “a well known man” and was being “publicly shamed”. Judge Nolan said unfortunately for society and the court cases such as this come before the court “with some frequency”. He said a psychological report before the court stateed it was unlikely Guerin would offend in this manner again and it “seems unjust” to imprison him.

He sentenced Guerin to two and a half years imprisonment, but suspended the sentence in its entirety on condition he keep the peace and be of good behaviour for two and a half years. Detective Garda Brian Pentony told Garrett McCormack BL, prosecuting, that gardaí­ received information from Interpol regarding the viewing of child pornography.

Gardaí were able to trace it to Guerin’s home via an IP address. Dt Gda Pentony said

Guerin was not present at his home on September 17th, 2014, when gardaí­ searched the address and seized certain electronic devices.

That evening, Guerin attended Swords Garda Station where he told garda]í they would discover child pornography on the devices and took responsibility for downloading it. Some 901 images and 146 videos of child pornography were discovered on a computer and an external hard drive.

Guerin has no previous convictions and has two adult children. Dt Gda Pentony agreed with Philip Rahn BL, defending, that there was no suggestion of distribution, no suggestion of payment for the material and no suggestion of contact with children in this case. Mr Rahn handed to the court a psychological assessment of Guerin which detailed that he attended individual therapy for 18 months beginning in 2014 and then followed on by attending group therapy which he continues to attend.

He said his client had attained significant insight into his offending and feels shame and remorse. He said the report recommended he continue attending group therapy for a further 12 months and identified him as being at a low risk of re-offending.

Mr Rahn said his client left the family home and lost his marriage as a result of these matters. He said he was very involved with a sporting club locally and that ended when these matters came to light as part of the public shaming and ostracizing he had suffered.

He submitted that this case “falls below the custodial threshold” even without accounting for the delay in proceedings. He said his client had “had this shadow hanging over him” for the last five years.