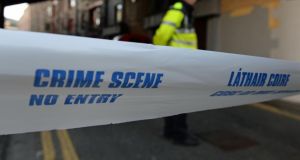 A Co Laois man who caused extensive injuries to a garda by punching him twice in the face with a knuckle-duster has been sentenced to six years, with 18 months suspended.

At a sentencing hearing at at Portlaoise Circuit Court, Judge Keenan Johnson described the actions of the actions of Keith McDonagh (22), as “reprehensible”.

McDonagh, with an address at Highfield Meadows, Portlaoise, was convicted of assaulting a peace officer and making threats to cause serious harm, at Colliers Lane, Portlaoise, on December 7th, 2016.

He pleaded not guilty, but was found guilty following trial last December.

His trial heard that McDonagh punched Sgt Aodhán O Flaithearta twice in the face with a brass knuckle-duster while gardaí attempted to arrest the accused and a member of his family. McDonagh also threatened to burn down Sgt O Flaithearta’s house and rape his wife.

Sgt O Flaithearta lost two front teeth and a number of other teeth were severely compromised. He has received extensive dental and orthodontic treatment and has developed severe facial pain, neck pain and headaches.

A probation report on the accused assessed him at a high risk of reoffending.