Carlow couple sued for €300,000 over allegations they caused a collision 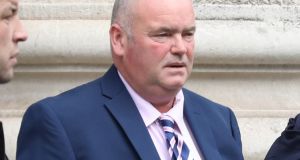 The only thing taxi driver Bernard Gaffney hit in April 2017 was his brakes yet the incident generated five personal injury claims totalling €300,000, Judge John O’Connor heard in the Circuit Civil Court on Tuesday.

Barrister Conor Kearney told the court Mr Gaffney, of Greenfort Crescent, Clondalkin, Dublin, sued a Co Carlow couple, the owner and driver of a car he claimed had caused him to slam on his brakes injuring himself and several of his passengers.

Mr Kearney said there had never been a collision and the first time Sarah and Brendan Hogan, of Tullow Road, Bennekerry, Carlow, knew they were facing claims for almost €400,000 damages and legal costs was when they received solicitors letters alleging they had caused a collision in which a number of people had been badly injured.

Counsel for the Hogans and Allianz Insurance, told Judge O’Connor it was the first time in his long experience in the courts that he had come across a personal injuries case involving only a braking manoeuvre which thousands of motorists carried out daily in their cars.

Judge O’Connor heard that Mr Gaffney was suing the Hogans and their insurance company while four of his passengers were suing him as well as Allianz and the Hogans. Only Mr Gaffney’s case came before the court on Tuesday but two of his passengers gave evidence of having been injured in the “emergency braking incident.”

Mr Gaffney and four passengers had brought personal injuries claims each for €60,000 damages.

The Hogans told Judge O’Connor they had got lost in Dublin traffic shortly after leaving a concert in the 3Arena in April 2017 and had been trying to find their way back to their proper route when they admittedly made an illegal right turn at the junction of Emmet Road and South Circular Road.

They said they had been totally unaware of any incident until their car was attacked at the next junction by two men who had jumped out of Mr Gaffney’s taxi which had been following them. One man had shouted “You’re dead” and both men started thumping their car which Brendan Hogan had quickly reversed and sped off.

He told Mr Kearney he had been involved in three previous personal injury claims in which he had received damages totalling €49,000. He was not aware of an attack on the Hogans’ car on the night of the braking incident.

He was not wearing his safety belt on the night and he had received a letter from his doctor noting irritation by the use of his seat belt following two instances of stomach surgeries, not connected with the 2017 braking incident.

Judge O’Connor said the medical letter did not exonerate Mr Gaffney from wearing his safrty belt. Dismissing Mr Gaffney’s claim with costs, the judge said he had not proven his case. While Mr Hogan had taken an illegal turn right, there had been no collision .

“What followed was an incident of road rage which ended up in a frightening experience for the Hogans,” Judge O’Connor said. The alleged groin injury to Mr Gaffney was far too remote to have been associated with the braking incident.

1 Midlands lockdown could extend to other areas, warns Covid-19 team
2 Midlands lockdown: Movement restrictions in place for residents of Kildare, Laois and Offaly
3 Sand-hued cyclepaths changing the face of south Dublin coast
4 Meat plant clusters may be down to softly-softly approach
5 Masks Q&A: Who has to wear them in shops and what happens if you don’t?
Real news has value SUBSCRIBE