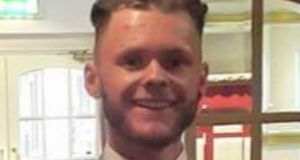 The late Callum Grimes was walking along the rural road when he was hit by a van.

A firefighter who drank up to 15 pints before he knocked down a 27-year-old man walking home from St Stephen’s Day celebrations has been jailed for five-and-a-half years.

Derek Keane (40) has no memory of getting into his van to drive home to Skerries in the early hours of December 27th, 2016, Dublin Circuit Criminal Court heard on Friday.

He went to gardaí later that day after he discovered his damaged vehicle parked at his house and heard that a young man had been injured in a hit-and-run.

Callum Grimes was walking along the rural road when he was hit. Other road users who came forward to gardaí reported that he did not appear drunk and stepped out of the way anytime a car approached.

Mr Grimes, described by his family as a “shy boy who loved life”, died seven months later in Beaumont Hospital after suffering catastrophic brain injuries in the hit and run. He never regained consciousness.

In an emotional and lengthy victim impact statement read out in court, Mr Grimes’ father, Mark Grimes, described the agony endured by the family as they watched their son ‘Cal’ suffer numerous operations, invasive procedures and blood clots in Beaumont Hospital.

He read out various diary extracts he and Mr Grimes’s mother wrote for their son, in the hope that he would one day wake up.

The family made the decision to turn off his life support on July 13th, 2017, after they were told he had “passed beyond hope”, the court heard. He died the following day, then aged 28.

Addressing Keane directly, Mr Grimes Snr said he would never understand how Keane, who was a part-time firefighter and qualified first-aider, could have left his son at the side of the road. He said he often wondered if those critical first hours could have made a difference.

He also criticised Keane’s delay in pleading guilty until the first day of his trial in October, saying it had put the family through “two years of hell”.

During that time, the victim’s mother was diagnosed with terminal cancer. She was too ill to attend court on Friday.

“I would like some day to find the grace to forgive,” Mr Grimes said. “But this is not the day.”

Sentencing Keane, Judge Martin Nolan said it was a “lamentable and tragic case”. He said the Grimes family had to witness their loved one dying over a lengthy period of time.

“I think most of us can imagine what it would feel like to watch a son, a brother, an uncle, a relative, a friend, dying in this fashion,” the judge said.

He said Keane’s offending was at the highest end of the scale for the offence of dangerous driving causing death.

“This man drank to such an extent that rendered him incapable of controlling his vehicle. He was even incapable of remembering what occurred,” he said.

He said that nobody would ever know what happened that night.

“But one thing is for sure; there was a collision and this young man was very badly injured and it ultimately led to his death.”

Dominic McGinn SC, defending, said there was nothing he could say that could alleviate the “obvious agony endured by Callum’s family”. A letter of apology from his client had been given to the family of Mr Grimes in court, he said.

He said Keane was a qualified electrician, who worked as a part-time firefighter. He has a partner and two young children, aged one and two, the court heard. He volunteers for the Salvation Army and is qualified in first aid.

Keane is deeply regretful for his actions that night, Mr McGinn said.

“He will life with the shame for the rest of his life.”