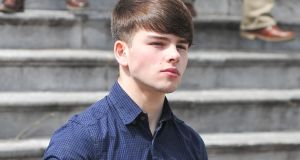 A teenager who took a case against a soccer club amid claims he suffered from post traumatic stress disorder after he was dropped from the team has lost his case at Cork Circuit Court.

Seán Cooke (18) of Highfields, Ballea Road, Carrigaline, Co Cork sued Carrigaline United claiming ill treatment by coaches at the club when he was aged 13 to 14.

Mr Cooke told Judge Sean O’Donnabhain that he was a good player who had aspirations to play in the UK. However, he wasn’t given the opportunity to display his skills to British talent scouts after he was allegedly dropped from the team.

Psychologist Caroline Goldsmith said he suffered post traumatic stress disorder as a result of being so dropped.

The court heard his father Declan Cooke had brought an unsuccessful vote of no confidence against the Carrigaline United coaches in the 2012-2013 season. Eleven parents of players voted on the issue and Mr Cooke lost by a vote of 9 to 2.

Coach Tim Mawe said he felt a duty of care to all of the young men in his charge and everything possible was done to accommodate Seán at the club.

Mr Mawe took over managing the team in 2011 -2012. The club had previously been managed by Mr Cooke, Seán’s father.

Mr Mawe said Seán was part of the very successful 2011-2012 season and that he played regularly. He said he received a lot of calls from parents who informed him that Mr Cooke was giving out about the management and that there was “non stop complaining” from Seán’s father.

He conceded he was very hurt when Mr Cooke brought a vote of no confidence against him. However, he rejected suggestions from the plaintiff’s barrister that he took any bad feelings out on Seán.

“We were volunteers. We were doing a great job. It was hurtful. There was no appreciation. He (Seán) was the same as any player. We picked on merit.”

Mr Mawe said Seán sustained an injury in the summer of 2012 and missed a large portion of pre-season training. When the season commenced Seán had to come off the pitch on one occasion because he was injured.

Seán Cooke claimed that prior to a match with Ballincollig during the 2012 season Mr Mawe pulled him aside and said that he wasn’t good enough to play. Mr Mawe said if he could he would play every player at every match.

“I didn’t say ‘you are not good enough’. You are dealing with kids. You are trying to be positive. You would love to play them all.”

Mr Mawe said Mr Cook’s mother arrived at the match and once she realised her son wasn’t playing there was a “huge commotion”. The court heard Declan Cooke subsequently texted him telling him never to contact him or his family again.

Mr Mawe said if he “had a superstar who was fully fit he would be in the team every week”. He told Judge Seán O’Donnabhain that the teenager was recovering from injury and that they were easing him back to the team. He said he couldn’t understand the decision by the Cooke’s to have Seán leave the club.

Barrister for the plaintiff, Matthew Maguire, told the court that Seán Cooke didn’t get the opportunity to play during a match against Ballincollig which was attended by an Aston Villa talent scout.

Mr Mawe said he was wasn’t aware of his attendance. He said “Pope Francis could have been at the match” for all he had known.

Seán Cooke told the court on Wednesday that he had aspirations to play soccer professionally but “(I stopped playing) because I was not being treated right. I wasn’t being treated the way I should have been treated. I was told I was not good enough.”

He felt like he was dropped from the team in the 2012/2013 season after playing 32 out of 33 matches in the previous season. He maintained he was dropped because the coaches had had a falling out with his father.

Representatives of the club insisted that Seán Cooke was given the opportunity to play for a team in the next oldest age group once the situation with his existing team had soured. However, Mr Cooke’s father reportedly turned this offer down.

The club also denied they had failed to give Seán the opportunity to go to another club instead saying that they had wished him well. Club representatives also rejected suggestions by the plaintiff’s barrister, Mr Maguire, that Seán had been taunted by club officials when he subsequently played matches for another club.

Judge Sean O’Donnabhain said it was an “emotional” and “difficult” case. He said Declan Cooke was undoubtedly a “caring parent” but that he was not “over blessed with insight”. He stressed that there was a need to establish a breach in duty of care in the case and that was not established.

In dismissing the case, he said Mr Mawe appeared to be “conscientious and truthful”. A ruling on costs will be made at a later date.