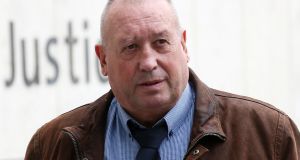 Anthony Handley (64) of Whitethorn Grove, Artane, was sentenced to two years in jail. He previously pleaded guilty to dangerous driving causing the death of Olivia Dunne and serious bodily harm to Eabha Dunne in Balbriggan in January 2014. Photograph: Collins Courts.

A man who killed a young mother and seriously injured her 15-week-old child when he hit them with his car while in “a micro-sleep” has been jailed for two years.

Gardaí believe Anthony Handley (64) drifted off momentarily before his off-road SUV veered from the road and hit the two victims near Balbriggan, Co Dublin. He had no alcohol or drugs in his system.

Judge Patrick McCartan refused a defence plea for a suspended sentence. He said Handley was a good man with a blameless record but that he should have been alert to the fact that he was becoming tired behind the wheel.

He said he was imposing the two year sentence “to send out the clear message to the community that fatigue must be a phenomenon in the minds of all drivers.” He also banned Handley from driving for ten years.

The judge said the offence was “in no way in the same bracket as someone who had taken alcohol and drugs” but that Handley’s tiredness was an aggravating factor.

He said society was only now starting to realise the dangers of driving while tired and noted the recent road safety campaign to that effect.

“I want to extend my deepest sympathies and condolences to Ciaran Dunne (the deceased’s husband) and his extended family,” Judge McCartan said. “It is a monumental the loss suffered by his and her family. Nothing that this court can do today will even begin to address or put right this enormous tragedy.”

Olivia Dunne (31) was killed instantly by the impact. Éabha Dunne was thrown from her pram and landed underneath the SUV in her cot. The pram was completely destroyed.

She had multiple broken bones and would have died if she did not receive medical attention, the court heard. She was in a coma afterwards and continues to suffer the effects of her injuries.

A victim impact report was read into court on behalf of Ms Dunne’s family which described them as “living with a nightmare.” Olivia’s husband of 18 months, Ciaran, said he was only alive today because Éabha survived.

“If there had been two coffins that day it is guaranteed there would have been three,” the statement read.

Ms Dunne’s sister, Caroline Clinton, said Eabha had to be resuscitated by doctors and now walks with a limp. She has had several operations and will require further surgery on her leg.

“She was expected not to survive, she beat the odds, she’s our little miracle,” Ms Clinton wrote.

She said Cíaran could not come to court on Tuesday because he never wanted to see the man who took away his wife.

“The anger and pain will always remain,” Ms Clinton said. “We will never come to terms with or forgive the devastating offence of Friday the 17th of January.”

Sgt Brian Kavanagh told Dominic McGinn SC, prosecuting, that Handley said he got four hour’s sleep the night before which was not unusual for him. He had taken some anti-inflammatories for his arthritis but appeared alert and orientated after the crash, the garda said.

A motorist who was behind him said he saw Handley’s SUV take off to the right “like a rocket” with no warning. He did not see any brake lights.

The vehicle went into the oncoming traffic where another driver had to swerve to avoid it. It then hit the mother and daughter who were on the footpath before crashing into a fence.

Parents and children were coming out of a near-by créche at the time. One man found Éabha in her cot under the vehicle. He moved her away when he noticed smoke coming from the SUV.

Handley was dazed and in shock after the collision but uninjured. A witness said he asked one of them “how was the chap I hit.” He later said all he remembered was travelling along “then a flash and bang and then the fence.”

Investigators found no brake marks from the jeep at the scene. They concluded that Handley had not been distracted and did not suffer from a medical condition which could have led to the crash. They said he must have entered a short sleep state before the crash. Handley accepted this was possible.

He wrote a letter of remorse shortly afterwards but the family did not want to receive it. He said he wished it was him who was killed that day instead of Olivia Dunne.

Handley initially took a trial date while awaiting medical reports. He entered a guilty plea on the morning of his trial.

Judge McCartan said this late plea meant the vicims’ family had to come to court many times before they knew there would be no trial.

Defence counsel Colm O’Briain SC said Handley was deeply remorseful. He said Handley is a father of three and is a carer for his estranged wife who suffers from several health problems.