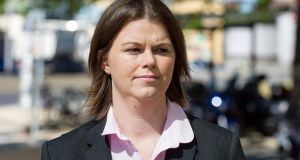 The jury in the trial of a childminder charged with assaulting a 10-month-old baby has failed to reach a verdict.

Judge Patricia Ryan has discharged them and thanked them for their service.

The judge had earlier said she would accept a majority verdict of 11 to 1 or 10 to 2.

The jury returned shortly after 12.30pm having informed the judge through the jury minder that they wished to make a statement.

When they returned, the foreman handed the judge a piece of paper with a message.

The judge read: “Judge, we cannot reach a unanimous or a majority verdict and do not believe we will do so with any more time.”

“Thank you very much for the care and attention you gave this case. Your jury service is at an end and you are free to leave,” the judge told them.

She said she would appreciate if the jury members did not speak about the case as there might be a retrial. The case has been put in for mention next Thursday.

The jury had deliberated for a total of five hours and 51 minutes. They deliberated for 63 minutes in total after the judge told them they were permitted to return a majority verdict.