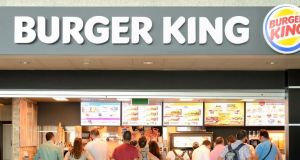 The incident occurred in a Burger King restaurant in the Nutgrove Shopping Centre, Rathfarnham, Dublin, in 2012. Stock image: Getty Images

A toilet door fell off its hinges and struck a Wexford man while he and his three-year-old son were using the facilities in a Dublin restaurant, Judge John O’Connor has heard in the Circuit Civil Court.

Mr Browne, who appeared with Bismilla Solicitors, said Mr Mulholland and his son were in a cubicle in Burger King in the Nutgrove Shopping Centre, Rathfarnham, Dublin, in 2012 when Jamie was just two months short of his fourth birthday.

“The cubicle door became detached from its hinges and fell on Mr Mulholland causing him to fall on top of his son,” Mr Browne said.

Mr Browne told Judge O’Connor that a personal injury settlement offer of €7,000 had been made to Jamie by the OKR Group, trading as Burger King, and he was recommending the court’s acceptance of the offer.

He said that while he did not think Burger King would contest the fact that the door had come off its hinges he believed that in a full trial they would contest the extent of injuries to the boy who had afterwards suffered from intermittent pain in his neck.

Judge O’Connor, approving the settlement, said he felt it was one that should be accepted by the court.