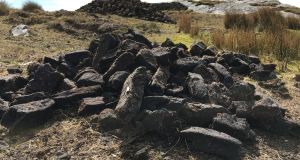 A turf cutter described Tuesday as ‘a great day for rural Ireland’ after a case against him and three other men accused of illegally cutting turf on EU-protected bogs in east Co Galway collapsed due to a lack of evidence. File photograph: Bryan O’Brien/The Irish Times.

A turf cutter described Tuesday as “a great day for rural Ireland” after a case against him and three other men accused of cutting turf on EU-protected bogs in east Co Galway collapsed due to a lack of evidence.

The four were initially charged in 2013 with cutting turf on three protected bogs in the Woodford and Portumna areas in 2012.

Following several adjournments, their trial opened before a jury on Tuesday at Galway Circuit Criminal Court.

Judge Rory McCabe directed the jury to return a verdict of “not guilty by direction of the trial judge” moments later because the State had conceded it could offer no evidence because a prosecution witness was in Australia.

Anthony Porter (51), of Bauntia, Woodford, had pleaded not guilty to a single charge of using machinery to extract turf or peat on an EU-protected site at Clonco bog, Woodford on August 21st, 2012, which would affect the integrity of the site in contravention of the European Communities (Birds and Habitats) Regulations 2011.

Michael Darcy(50), of Ballycahill, Killimor, Ballinasloe, pleaded not guilty to cutting turf on protected bog at Derryvunlan, Portumana on May 23rd, 2012. He also denied a second charge of cutting turf on Clonmoylan bog on May 22nd, 2012.

Padraic Byrne (64), of Killimor, Ballinasloe, denied cutting turf at Clonmoylan bog on May 22nd, 2012 and again at Derryvunlan bog the following day.

A group of supporters, who had earlier held a silent protest on the steps of the courthouse, applauded loudly as the judge told the men they were free to go.

Gearoid Geraghty, a solicitor who represented three of the four men, said it had been an extremely stressful period for his clients and their families. Mary Trayers Solicitors represented the fourth.

“These are ordinary, country people and they have been here now on 14 separate occasions awaiting trial,” he said. “They don’t see themselves as criminals. They’re just doing what they’ve done all their lives and their parents and grandparents did before them.”

Mr Darcy said “it’s a great day for rural Ireland because now we’ve been vindicated and we can cut turf in our own bogs”.

“We will be back out on the bogs in a month’s time, weather permitting,” he added.