Cannabis may cause strokes in young people, Irish medic says 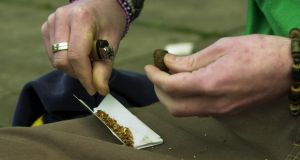 The drug has been linked to strokes in young people but it is not known why. Photograph: Frank Miller/ Irish Times

High potency cannabis is putting young people who heavily use the drug at risk of stroke, a leading specialist told an inquest.

Consultant stroke physician professor Joseph Harbison told Dublin Coroner’s Court that doctors at St James’s Hospital have seen “five or six cases” of young people having strokes following the use of herbal cannabis in the past three years. The strokes may be linked to the increased potency of cannabis available in Ireland over that period, he said.

He was speaking at the inquest into the death of 33-year-old Noel Boylan of Oliver Bond House in Dublin 8 who collapsed on Thomas Street in the city centre on August 17th last year.

Mr Boylan was taken to St James’s Hospital where he was treated for a suspected seizure but later developed a stroke. He died in the hospital on September 2nd when a blood clot travelled to his lungs.

Following his death, prof Harbison requested that an autopsy be carried out because Mr Boylan had been a regular cannabis smoker.

The drug has been linked to strokes in young people but it is not known why.

Until Mr Boylan’s death it had not been possible to study the blood vessels in the brain affected because few young people die from stroke and brain biopsies are dangerous, the court heard.

When the blood vessel was examined by a neuropathologist, they found that the lining had “grossly thickened” and blocked off the artery resulting in the stroke. Prof Harbison said that this echoed findings in another of his patients, a heavy cannabis user who had had a blood vessel outside the brain biopsied after surviving a stroke. This raised concerns that the potency of cannabis available in Ireland is affecting heavy users by irritating the lining of blood vessels, he said.

“The cannabis available in and around Ireland at the moment is typically hydroponically [IN WATER]grown and has a very high potency… I now strongly suspect that we are seeing the consequences of younger people developing an arteriopathy [arterial disease] related to the direct irritant effects of this new potent cannabis,” he said.

Returning a narrative verdict outlining the facts coroner Dr Brian Farrell said that further research into the link between high potency cannabis and stroke is needed and that he hoped the case would generate debate in the medical community.

Speaking following the inquest, prof Harbison said that he did not believe that irregular users of the drug are at risk.

“There is a level of concern that there is an association with particularly heavy users. We are seeing people coming in with strokes where we cannot find any cause but their cannabis use. This case and the other case leads you to think that there is a direct organic effect to it,” he said.

* The headline on this article was amended on October 23rd, 2013 for clarity.