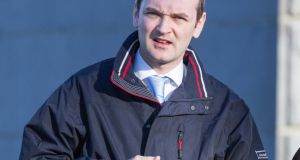 Henry Healy escaped without a conviction after Judge Patrick Durcan noted that the Moneygall man “has an impeccable record of service to the State”.

However, the 29-year old escaped without a conviction after Judge Patrick Durcan noted that the Moneygall man “has an impeccable record of service to the State”.

In court, Mr Healy – known as Henry the Eight through his connection with the current US president – pleaded guilty to careless driving that led to a road crash at Shraheen, Clooney, near Ennis, at 7pm on May 8th last.

Outlining the facts, Insp Tom Kennedy said that Mr Healy was involved in the two-car collision “after he suffered a momentary lapse in concentration and his car veered off his line and over to the path of the oncoming car”.

Insp Kennedy said: “The two cars didn’t hit head-on; they hit sideways and there was a collision.” Garda O’Callaghan said that the driver of the other car, Teresa Guinnane, “knew there was going to be an impact and braced herself for it”.

Mr Healy did sustain minor head injuries in the crash, while Ms Guinnane sustained a broken bone in her foot and upper body soreness.

Judge Durcan said: “We must punish someone without criminalising them and I suggest €500 to the poor box and strike out the charge.”

Judge Durcan said to Mr Healy: “Best of luck to you. I had the experience you encountered on the road myself in the past.”