No valid challenge to award as it was just, fair and proportionate, says Court of Appeal judge 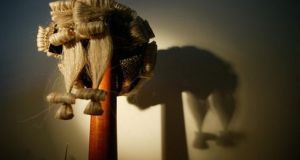 An appeal over a damages award made to a man whose foot was crushed when he was working in a quarry has been dismissed. File photograph: Getty Images

An appeal over a €453,000 damages award made to a man whose foot was crushed by a digger when he was working in a quarry has been dismissed by the Court of Appeal.

Brothers Michael and Charles McDaid, representing themselves, and McDaid Quarries Ltd, unrepresented, appealed the award to David McLaughlin over injuries suffered on June 26th, 2003, when he was aged 17, at a quarry near Burnfoot, Co Donegal.

The three-judge court had previously rejected claims by one appellant, Michael McDaid, that it could not validly hear the appeal because two of the judges were women.

Mr McLaughlin, originally from Buncrana but now living in the US, alleged he suffered the injuries after an excavator was driven over his foot by another man, also aged 17. Half of his right foot was later amputated.

In the High Court, Mr Justice Michael Hanna found Mr McLaughlin and the excavator driver were both working for McDaid Quarries at the time. He held the employers were negligent and failed to take adequate precautions for the safety of Mr McLaughlin.

In the Court of Appeal judgment on Wednesday, Ms Justice Mary Irvine noted the appellants alleged the claim was fraudulent because Mr McLaughlin originally claimed his injuries were caused by negligent use of a lorry and the incident involved the wheel of a lorry.

That arose from his belief such a claim would entitle him to recover damages against the Motor Insurers Bureau of Ireland without recourse in the first instance to the McDaids, she said.

Mr McLaughlin was permitted in 2014 to amend his claim to substitute the word “digger” for motor vehicle, and his claim proceeded on the basis his injuries were caused by a digger driven over his foot at the quarry, owned by the appellants or one or other of them.

The High Court said Mr McLaughlin was a vulnerable minor with learning difficulties at the time. It found that while he initially advanced a false claim that the incident involved a lorry rather than a digger, he probably did so at the behest of the McDaids, with a view to their securing indemnity from an insurer to meet any claim by Mr McLaughlin.

Ms Justice Irvine said because Mr McLaughlin had not sought to dispute affidavits verifying his claim and purportedly signed by him in 2006, when he was in the US, he must have been taken as approving their content and authorising service of the claim on all defendants, including the MIBI.

That claim was false and misleading in a material respect and Mr McLaughlin had thus breached provisions of the Civil Liability and Courts Act 2004, meaning the High Court must dismiss the case unless satisfied that would result in an injustice, she said.

The High Court held it would be unjust to dismiss the claim based on findings including Mr McLaughlin was young, naive and of poor intellectual capacity when he agreed to participate in the intended fraud by delivering and verifying a claim he knew was false and misleading.

It found, regardless of where he was living, that he was under the influence of Charles McDaid when he made the false claim, but that he later withdrew it, delivered an amended claim which the High Court considered bona fide, and gave truthful evidence.

Ms Justice Irvine said, while delivery of a false claim can have “very serious” consequences, she was fully satisfied, in these unusual and special circumstances, the matters relied on by the High Court provided “good and sufficient” reason to support its conclusion that it would be unjust to dismiss the case.

There could be no valid challenge to the damages awarded, as those were clearly supported by evidence and were just, fair and proportionate, she also ruled.

Earlier, the court refused to adjourn the appeal pending a Garda investigation into a complaint the McDaids had made.