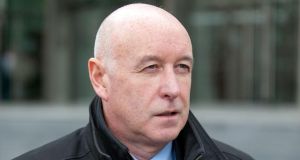 Anthony Lyons leaving the Court of Criminal Appeal today. The DPP appealed the leniency of the sentence in which Lyons (53) of Griffith Avenue, Drumcondra, was sentenced to six years, with five and a half suspended for sexually assaulting a woman. Photograph: Collins

Businessman Anthony Lyons, who received a six-month custodial sentence for a violent sexual assault, will “never be forgotten” and will “always be notorious”, the Court of Criminal Appeal has heard.

The three-judge court today heard submissions in a re-hearing of an appeal against the undue leniency of a sentence of six years with five-and-a-half years suspended imposed on Lyons (53) by Judge Desmond Hogan in July 2012.

The respondent, the owner of an aircraft leasing company from Griffith Avenue in Dublin, had pleaded not guilty at Dublin Circuit Criminal Court to attacking and sexually assaulting a then 27-year-old woman in the early hours of the morning of October 3rd, 2010.

Lyons was ordered by Judge Hogan to pay his victim €75,000 in compensation.

In November last year the appeal court found that the sentence imposed was “unduly lenient” but reserved the reasons for its judgement and later reserved its decision on what sentence should be imposed in its place.

However, due to the illness of sitting judge Mr Justice Michael Hanna, the court had to be reconstituted and the appeal re-heard.

Counsel for the State, Ms Caroline Biggs SC, today told the appeal court it was the Director of Public Prosecution’s submission that the sentence imposed was on Lyons “unduly lenient” in all the circumstances.

She said it was the suspension of five-and-a-half years of a six-year sentence that was of concern to the Director.

With regard to the compensation matter, Ms Biggs said Section 6 of the Criminal Justice Act 1993 was envisaged as a process where a plaintiff did not have to through civil proceedings if the compensation paid was to the satisfaction of all parties.

She submitted that its weight as a mitigating factor depended on all the circumstances of the case, and the court must look at all of these.

She said that although the sentencing judge referred to the long-lasting effect of the attack on the victim and her family and its psychological effects as set out in the victim impact report, he did not give practical effect to these matters.

Counsel submitted there was a need not only to impose a sentence that reflected the gravity of the offence, but also the effect on the victim and society as a whole, as well as a need not only for specific but general deterrence.

She said the sentence must not only deter the accused himself but must impose a general deterrence.

Ms Biggs said there were two factors – compensation and the issue of remorse – which it was submitted were given inappropriate consideration. Counsel said that a plea of not guilty was not an aggravating factor but did amount to a loss of mitigation.

Mr Gageby told the court that the matter was not disposed of by way of a compensation order and a very substantial period of suspended sentence was imposed.

He submitted that this was not a case in which it could be properly said that the trial judge placed excessive reliance on the compensation aspect.

Mr Gaegby said the offence had been a unique piece of criminal activity in his 51st year by a man of previously good character.

Counsel said he was not trying to say that character trumps jail or the gravity of an offence, but there were also a number of unique characteristics such as the absence of previous convictions and a “completely blameless” life involving charity work and other aspects.

He said the consequences of conviction were “very large for somebody like Mr Lyons”, adding that because of the custodial element of the sentence the issue of individual deterrence had been addressed.

Asked by sitting judge Mr Justice Daniel Herbert how the box of public deterrence had been “ticked”, Mr Gageby said that this had been addressed by the large period of suspended sentence, which he agreed acted like a “sword of Damocles”.

He added that there were also consequences from being on the sex offenders register and an “enormous loss of reputation” arising out of conviction.

In reply, Ms Biggs said the responded had submitted the “clang of the prison gates” had more effect on a person with no previous convictions, but in her submission this term was used in reference to cases of revenue fraud and tax evasion and the context of this case had to be considered.

With regard to any new sentence to be imposed should the court reach a decision on undue leniency, Mr Gageby submitted there had been a very significant effect on Lyons and his family, and while the consequences of being convicted were not something he could complain of, there had been “unwanted attention” from the media and those outside the media.

Counsel said that an update probation report which outlined how Mr Lyons had moved to the United Kingdom where he was subject to supervision for life because of his conviction in Ireland.

He said a “very large folder” on media coverage had also been submitted to the court along with an accompanying report on that coverage.

Mr Gageby said the report made a number of findings, including that there had been a significant amount of news coverage focusing on Lyons’ lifestyle, family home and some focus on his children.

Mr Gageby said the Lyons case had also been repeatedly reported alongside cases of child sexual abuse, rape, manslaughter and murder and that Lyons had been referred to as a “Sex Beast” “Sex Attacker” “Sex Pervert” “Sicko” and “Monster”.

“My client will never be forgotten; he will always be notorious”, Mr Gageby said.

He said there were also minor details in the submissions such as Mr Lyons being asked to leave his golf club.

The trial court heard evidence that the victim was walking home after a night out with her family when she approached from behind by Lyons who “rugby-tackled” her to the ground on a dark stretch of road.

Evidence was heard that Lyons attempted to take the victims mobile phone - with which she had earlier struck him on the head – and attempted to stop her calling out by putting his hand over her mouth and around her neck.

The victim said she was groped and digitally penetrated during the attack until a passer-by came to her aid, causing Lyons to flee.

Gardaí were immediately alerted and Lyons was arrested nearby.

He initially completely denied the offence and was released on bail. Several months later he handed a statement to gardaí admitting the attack but claiming he was overcome with an “irresistible urge” brought on by the cholesterol medication he had started taking the day before.

Lyons was released from prison in December 2012.