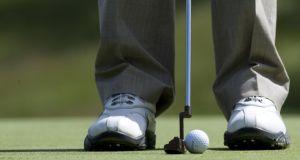 Thomas Talbot brought a case alleging defamation and conspiracy against the Hermitage Golf Club in Lucan, Dublin; one of its officers, Eddie Murphy; and the Golfing Union of Ireland. Photograph: Don Emmert/AFP/Getty Images

The Chief Justice has called for greater use of judge-managed litigation after dismissing an appeal in a case, which took up 83 days in the High and Supreme Courts, arising from an amateur golfer’s claim he was falsely accused of cheating about his handicap.

Ms Justice Susan Denham said the system “would benefit by further development and use of case management so the best use can be made of scarce court resources for the benefit of all litigants”.

She made the remarks when the three judge Supreme Court dismissed Mr Talbot’s appeal against a High Court decision he was not defamed in a notice sent by his club referring to “handicap building”.

Mr Talbot, who represented himself, wrote to the Supreme Court office saying he could not attend today. The Chief Justice said the court would hand down its judgment but adjourn other issues, including costs, to later this month.

In the High Court in July 2012, Mr Justice Daniel Herbert dismissed the retired insurance official’s action alleging defamation and conspiracy against the Hermitage Golf Club in Lucan, Dublin; one of its officers, Eddie Murphy; and the Golfing Union of Ireland.

Mr Talbot (76) claimed a certificate sent to him in 2003 by the handicap sub-committee, stating his handicap was 13, with the words “General Play (Handicap Building)”, meant he was cheating.

Mr Justice Herbert rejected claims he had been defamed and there had been a conspiracy against him by the club.

While other golfers could conclude “handicap building” meant deliberately inflating one’s handicap, the words were only published in a limited form to a computer programmer who designed software for the club, including for handicap records. This limited publication meant the club enjoyed qualified privilege from being sued, Mr Justice Herbert said.

Giving the Supreme Court’s unanimous decision, Mr Justice Charleton, with whom the Chief Justice and Mr Justice Adrian Hardiman agreed, said the conduct of Mr Justice Herbert in the High Court hearing was exemplary, his summary of the law was unimpeachable and his findings of fact were supported by more than ample evidence.

What was in essence “a very simple case” had taken up 83 days in the High and Supreme Courts, he said and agreed with the Chief Justice on the need for case management before cases go to trial.

He said Mr Talbot had insisted on calling every witness to give evidence in the High Court, including ones who clearly were not likely to be helpful to his case. “These were examined and cross-examined by him, sometimes at astonishing length and in a bewildering fashion,” he said.

The Supreme Court also rejected Mr Talbot’s claims of conspiracy and about the conduct of the High Court trial.