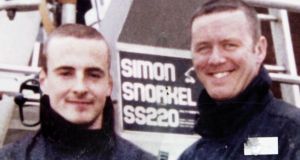 Bray firefighters Mark O’Shaugnessy and Brian Murray who were killed fighting a blaze in Bray in September 2007.

Wicklow County Council was yesterday fined €355,000 for admitted breaches of health and safety at work legislation related to the deaths of two Bray firefighters, Brian Murray and Mark O’Shaughnessy, in 2007.

On the ninth day of its trial at the Criminal Courts of Justice, the council last July changed its plea to guilty, in a deal with the Director of Public Prosecutions. It admitted three counts of failing to provide firefighters with an adequate communications system and equipment; failing to review its own health and safety statement identifying hazards and risks to firefighters; and failing adequately to train firefighters in the use of new foam spraying equipment.

In return, the DPP dropped a charge which linked these failures to the deaths of the firefighters in September 2007, when they tried to fight a fire with the foam spraying equipment. Yesterday, Judge Desmond Hogan imposed a fine of €50,000 on the first count, €5,000 on the second and €300,000 on the third. He also awarded costs, estimated at €95,700, against the council.

Members of the Bray fire service in court were angry at the council’s refusal to accept responsibility for the deaths.

5 Covid-19: State on track to ease retail restrictions in May amid extra Pfizer vaccines