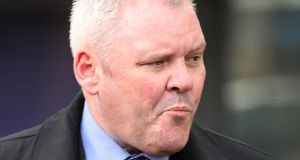 Four Chelsea fans – including a former RUC officer from Northern Ireland – caught up in the Paris Metro train race row have been banned from football matches for up to five years.

Video showed Frenchman Souleymane Sylla repeatedly pushed off the carriage amid chants of “we’re racist, we’re racist, and that’s the way we like it”.

It happened as Chelsea fans were in the French capital to watch the west London club’s Champions League match against Paris St Germain on February 17th.

Earlier that evening a gang of around 150 Chelsea supporters had roamed through Paris, some lighting flares as they chanted, while others clambered on cars.

District Judge Gareth Branston told London’s Stratford Magistrates Court: “This was an abhorrent, nasty, offensive, arrogant and utterly unacceptable behaviour and cannot be allowed in modern, civilised society. It must be stamped out.”

He said Barklie, a former RUC officer and a director with the World Human Rights Forum, and Parsons were ringleaders.

The four men had denied they were racist and claimed Mr Sylla was only pushed off the train because it was “packed”, not because he is black.

But footage was played to court showing some of the men join in the racist chanting as the Parisian was pushed.

In a statement read out in court, Mr Sylla told how he was “violently” forced off the train as Chelsea fans jeered and one pointed to his skin colour. “I again approached the carriage, explaining to this person I wanted to get back on the train. He didn’t seem to understand what I said to him, and other supporters behind him were shouting and singing in English. As I don’t speak English, I didn’t understand what they said. Another person made a sign indicating to the colour of the skin on his face.”

Barklie, admitted twice pushing Mr Sylla – but blamed the Parisian for using “aggression” and shouting as he tried to board.

But on Wednesday district judge Branston said Barklie joined in the racist chanting of “John Terry is a racist and that’s the way we like it”.

And he said the former policeman “proved to be a menace” and had “demonstrated aggressive, disorderly conduct”.

Parsons, who used to work for a finance company in Mayfair and lives in Dorking, Surrey, leaned out of the train and shouted “where were you in World War Two?” and “F*** the IRA”, the court heard.

The judge said Parsons displayed “aggressive and disorderly conduct as part of a pack of Chelsea fans”.

Munday, of Sidcup south-east London, is said to have joined in the racist chanting, an allegation he denied, insisting he was just “breathing”.

He had earlier “fronted up” a man who was walking through Paris, pushing him twice before being told to calm down by police, the court heard.

Simpson, of Ashford, Surrey, also played a part in pushing Mr Sylla off the metro train.

He has previously been arrested twice before for race-connected crimes, including once allegedly calling a taxi driver a “f****** Paki”.

All men had denied being racist and fought the Metropolitan Police’s attempt to give them a football banning order.