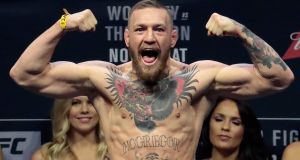 Prosecutors in Miami have dropped a case against UFC star Conor McGregor relating to an incident in Florida in March.

The trial was due to begin at Miami-Dade County Criminal court on Monday but the State Attorney’s Office announced that the alleged victim had dropped his case. He had already settled a civil lawsuit with McGregor.

According to the assistant state attorney Khalil Madani, the alleged victim told prosecutors that Mr McGregor had grabbed his phone and stamped on it - events that were corroborated by video footage.

But on April 3rd, two weeks after swearing a sworn affidavit, lawyers for Ahmed Abdirzak told prosecutors that their client had “had some time to reflect” on his encounter with Mr McGregor and no longer believes Mr McGregor “sought to injure or damage him or his property or permanently or temporarily deprive him of his property”.

The assistant state attorney said that, even if the state were able to produce Mr Abdirzak, who lives in Britain, at trial, he had credibility issues as a witness. The state believed it would be unable to prove the charges against Mr McGregor beyond reasonable doubt.

McGregor was charged with robbery and criminal mischief after he reportedly grabbed a phone from a fan and smashed it before walking away with the phone in Miami Beach in the early hours of March 11th.

In a police report, Miami beach police said McGregor slapped the victim’s phone out of his hands and “stomped on it several times” after the man attempted to take a picture of the UFC fighter.

The report added: “The defendant then picked up the victim’s phone and walked away with it.”

The former UFC featherweight and lightweight champion faced legal troubles in the Untied States last year after an altercation in Brooklyn, New York during which he attacked a bus outside the Brooklyn Center.

McGregor avoided jail over the incident which left two of his UFC opponents injured.

The court ordered the Dublin native to complete five days of community service and complete an anger management course.

His co-accused, Cian Cowley,was also given community service and instructed to complete an anger management programme.

Both men pleaded guilty to disorderly conduct but the original felony charges against them were dropped, allowing the men to avoid a criminal trial.

1 Woman stranded in Ireland due to pandemic has ‘miracle baby’
2 ‘Difficult months ahead’: Europe prepares for more pain as Covid cases soar
3 Two hundred Irish retailers for all your online Christmas shopping
4 Covid-19: Critical cases from NI could put pressure on services in Republic
5 Covid-19: Public urged to ‘stay at home’ as 1,025 further cases confirmed in State
Real news has value SUBSCRIBE