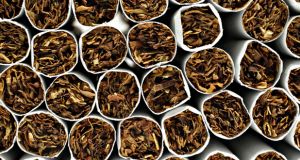 Seizures of counterfeit alcohol increased four-fold this year compared with last, while seizures of smuggled cigarettes and tobacco appear to have declined sharply, according to figures from the Revenue Commissioners.

Figures covering the first 10 months of this year also suggest seizures of such drugs as cannabis, heroin, cocaine and ecstasy are also down considerably on last year.

Some 929 litres of counterfeit alcohol were seized by customs officials in the period to the end of October this year, compared with just 232l in the same period last year. The most commonly copied alcoholic product was vodka. It is not only illegal but can be extremely dangerous and even lethal, warns Revenue.

“In many cases the alcohol is sourced from the industrial sector and may contain high quantities of methanol. Human consumption of methanol is very dangerous and can have serious and even fatal effects, including blindness,” said a spokeswoman.

She said the bottles were filled with raw alcohol to a set level and then diluted with water to a normal strength of alcohol for the market – between 37.5 per cent alcohol by volume (ABV) and 40 per cent ABV. The bottles would usually be genuine, sourced from recycling or centres or pubs and so very difficult to tell from the genuine article. However hygiene standards were generally non-existent and there were no quality assurances in place at sites were such products are produced.

Revenue attached a high priority to dealing with the criminal cigarette and tobacco trade, the spokeswoman said.

“The illicit trade in cigarettes and other tobacco products poses a threat to legitimate law-abiding businesses and deprives the exchequer of significant tax revenues. It also works against the Government’s anti-smoking policy, for example, by making cigarettes available to young people who can’t obtain them through legitimate channels.”