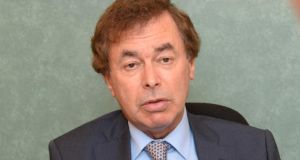 The law should be changed to make it more difficult for legal challenges to delay referendum results taking effect, former minister for justice Alan Shatter has said.

In a Private Member’s Bill to be published on Wednesday, Mr Shatter suggests challenges to referendum results should be fast-tracked in the courts.

He also says appeals in such cases should automatically bypass the Court of Appeal and go straight to the Supreme Court.

The constitutional amendment on children’s rights took effect only last April, more than two years after the referendum was approved in November 2012. This was due to legal challenges against the outcome and delays at the Supreme Court.

A more recent attempt to challenge the outcome of the marriage referendum was thrown out by the courts.

With legal challenges to referendum results having become common in recent years, Mr Shatter said it was in the public interest that such cases were fast-tracked and not “unnecessarily prolonged”.

“It’s likely that in the next Dáil there will be a variety of social issues that could be addressed which could be the subject of a referendum.

“I believe it is anti-democratic to allow a situation to continue where the people at a referendum make a decision and maybe two or three years later that decision is implemented.”

He said different decisions might have been made to protect the best interests of children in the 2012-2015 period if the children’s rights amendment had been written into the Constitution within days of the referendum.

Instead, he said, the people’s wishes, as expressed at the ballot box, were not implemented for 2½ years.

He said it was also in the public interest to have “absolute clarity” as to when it was constitutionally correct for the referendum certificate to be given to the President for his or her signature.

That issue arose this month when the Supreme Court rejected the two attempts to appeal the marriage referendum outcome. While declining to hear the appeals, the court also noted that the issue was moot because the amendment had already been written into the Constitution.

Mr Shatter’s Bill attempts to prevent this occurring again by stating that an automatic stay would apply to a High Court order in the event of an appeal being taken to the Supreme Court. This is designed to ensure, pending the issue being determined by the Supreme Court, that the decision of the court cannot be pre-empted by a referendum returning officer providing a final certificate to the President for his or her signature.

The Bill provides that where the High Court refuses permission to challenge a referendum result, any appeal must be lodged with the Supreme Court within three days, and that that court would have two weeks to decide the appeal.

Substantive hearings of referendum challenges in the High Court would be completed no later than six weeks after the granting of permission to mount a challenge, and the High Court’s decision would be delivered within three weeks of the hearing.

The Bill also requires the Supreme Court to hear and complete appeals within six weeks, and deliver its judgment no later than three weeks after a hearing.