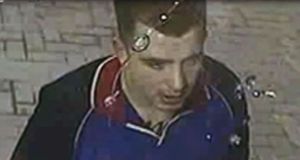 An undated Police Service of Northern Ireland handout photo taken from CCTV footage of Kieran McManus taken moments before he was gunned down. Photograph: PSNI/PA Wire.

Detectives investigating the murder of a pizza delivery driver in west Belfast have released images of him moments before he was gunned down .

Father-of-one Kieran McManus, 26, was shot a number of times at close range in a car park outside the Domino’s pizza outlet where he worked last March.

On the first anniversary of his death, police have released pictures and CCTV footage in a bid to encourage witnesses or anyone else with information about the shooting to come forward.

No-one has yet been charged with the killing.

The images show Mr McManus in his uniform getting change at a garage shortly before he returns in his silver Volkswagen Passat car to the outlet at the DC Enterprise Centre, Kennedy Way where he was murdered.

He was shot by a man who got out of a maroon coloured Vauxhall Astra car at 11.20pm on March 30th last year.

The Astra car was abandoned and burnt out in Denewood Park off the Andersonstown Road shortly after the shooting.

Detectives are asking the community for any information about the Astra, before or after the shooting. They are also keen to hear from anyone who saw any other vehicles in Denewood Park or in nearby St Meryl Park that Saturday night between 11pm and midnight.

Detective Chief Inspector Justyn Galloway, who is leading the investigation, said: “One year on from this ruthless murder, the police investigation is continuing.

“Kieran worked as a pizza delivery driver, trying to earn a living for his family. This was a ruthless and reckless attack, given the number of people in the area at the time.

“The footage shows Kieran getting some change at a nearby garage before returning to the pizza outlet where he was shot. I would ask everyone in this community to look at these images and think about the fact that a short time later, Kieran was dead.”

In the past year the PSNI has interviewed 107 civilian witnesses, conducted nine searches and made one arrest in connection with the murder.