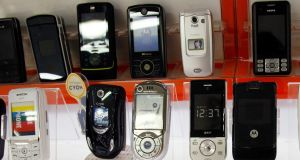 Mobile phones seen on display in a shop. Gardai said 1,000 smartphones have been stolen in Dublin city centre since the start of the year. Photograph: Reuters

Over 1,000 smartphones worth €430,000 have been stolen in Dublin city centre since the start of the year, according to Garda figures.

About 60 per cent have been stolen in bars, cafes and nightclubs while the rest have been taken off people on the streets, according to figures of thefts reported to Pearse Street and Store Street garda stations.

Most phones are stolen by people from outside Ireland, often from eastern Europe, who are involved in international organised crime, said Chief Supt Michael O’Sullivan of Pearse Street. The phones are then taken out of Ireland with many of the criminals involved having already been arrested in other European countries for stealing mobile phones.

People are being urged to keep a note of their IMEI number - an identifying number which allows phone operators to disable the phone even if a new Sim card is used. But the phone can be reactivated once it is taken outside of Ireland, hence the international crime aspect to it.

“We have individuals who have been arrested here in possession of maybe nine or 10 phones having stolen them on one particular night,” Chief Supt O’Sullivan said. About 40 per cent of phones are stolen by Irish criminals which can involve organised crime “but not to the same extent as the international side of it”.

Since July last year 600 people have been arrested over stolen mobile phones with 17 people arrested last weekend in the Pearse Street area alone.

Gardaí are urging people to be aware of how they use their phones while in public and to be aware of who is around them while texting or talking into the phone.

“Walking along with a a phone in your hand is akin to holding a €50 note in your hand,” said Chief Supt O’Sullivan this morning during a meeting of Dublin city joint policing committee, a group made up of councillors, gardaí, TDs, Senators community and business representatives.

The committee is to distribute a leaflet warning about mobile phone thefts.

Figures show almost 8,000 smartphones were stolen across Dublin in the first six months of last year.

Smartphone owners should have their IMEI number stored in the information section of their phones or it can be obtained by typing *#06# into the keypad.