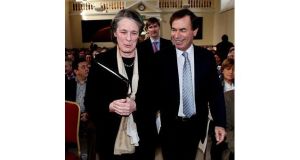 Chief Justice Mrs Justice Susan Denham with Minister for Justice Alan Shatter at a seminar on the establishment of a Court of Appeal in the President's Hall at the Law Society of Ireland in Dublin today. Photograph: Julien Behal/PA Wire

Serious delays at the Supreme Court and the Court of Criminal Appeal are “unsustainable”, “untenable” and “cannot be defended”, the Chief Justice said at a seminar on Constitutional reform.

Outlining the lengthy delays in Ireland's appeals system, Mrs Justice Susan Denham said an appeal certified as ready yesterday was in danger of not getting a date for hearing until mid 2017.

“The structure of the superior courts in Ireland was not designed to cope with the volume and complexity of the litigation coming before the courts daily in the 21st century,” she said.

Some 543 cases were currently ready to be heard on appeal and 71 of these had priority listing and would wait an average of nine months.

The delays, due to a large increase in litigation, not only impacted on litigants but also had an impact on the economy, Mrs Justice Denham said.

Her remarks were made following a pledge from Minister for Justice Alan Shatter that a referendum would be held in the autumn to introduce changes to the courts system to allow for a more efficient system of appeal.

The Minister said the Government was “absolutely committed” to proceeding with the necessary amendments to the Constitution.

Mr Shatter and the Chief Justice were addressing a seminar at the Law Society in Dublin on Constitutional Reform relating to the Courts.

The changes envisaged include a new civil court of appeal as well as a separate system of family courts. Reform of Article 26, which allows the President refer new legislation to the Supreme Court to check if it is compatible with the Constitution, is also to be considered.