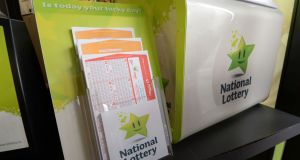 A married couple who decided to buy a lottery ticket when passing a newsagent in Co Clare have won a €5.3 million jackpot. Photograph: Dara Mac Donaill / The Irish Times.

A married couple who decided to buy a lottery ticket when passing a newsagent in Co Clare have won a €5.3 million jackpot.

The pair have been playing the same numbers since the Lottery began in 1988 but it was an additional quick-pick line that actually secured the win.

“I included just one line of quick-pick numbers, as insurance, and that’s the line that won,” said the husband, who has opted to remain anonymous.

“When I went online on Wednesday night and saw that the numbers were a quick-pick selection, I said to myself ‘I probably have them all’.”

He said that when he had “stopped shaking” after seeing the numbers, he went to the fridge, got a bottle of wine, poured two glasses and gave one to his wife, who was sitting in her pyjamas by the fire.

“She didn’t know what was happening - (she) thought I’d lost my mind. She must have checked the ticket a thousand different ways before she’d believe we’d won.”

The couple plan to use the €5.3 million to fund a trip to Las Vegas, support their family and, of course, buy a sports car.

“I’m definitely buying a two-seat convertible Ferrari. It’s been on my bucket list and now it’s time to act.”

They purchased their €7.50 ticket in Roslevan Stores, Ennis, Co Clare on Wednesday just before the draw.

It is the 40th Lotto jackpot to be won in the county - although a little off the €8.3 million record picked up in 2014 - bringing total jackpot winnings for Co Clare to €60.1 million, the National Lottery said.