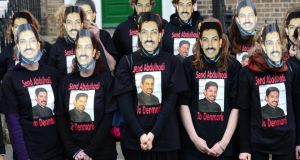 The Royal College of Surgeons in Ireland (RCSI) should maintain its presence in Bahrain but not at the expense of the values that should underpin any academic institution, the former head of its Bahrain campus, who resigned earlier this year, has said.

Prof Tom Collins quit over the cancellation of a conference on medical ethics he helped organise in conjunction with medical charity Médecins Sans Frontières.

The theme of the conference – “Medical Ethics and Dilemmas in Situations of Political Discord or Violence” – appears to have struck a nerve in Bahrain, given the fallout from the rounding-up of scores of medics in 2011 as Bahraini security forces tried to quash pro-democracy protests.

Detainees
Three of those detained had trained at the RCSI in Dublin. The college, whose investment in Bahrain amounts to €70 million, was criticised for failing to take a public stand against the crackdown.

Prof Collins, who was appointed president of RCSI-Bahrain later that year, told a conference in UCD yesterday that he soon realised “silence was not an acceptable stance” given the “heavy-handed oppression” of a government that had chosen to “[adopt] a security approach to dealing with a political problem.”

Prof Collins believed the conference on medical ethics was one way the RCSI could address the situation in Bahrain as an academic institution.

“There is no way in a divided community that an organisation can be non-political: every act is a political act, silence is a very profound political statement,” he said.

“The RCSI is extraordinarily powerless in Bahrain, it is a relatively insignificant foreign institution but it has a responsibility to itself to hold its moral purpose at core, and the key moral purpose of any higher education institution is academic freedom.”

‘Eye of the world’
Prof Collins argued that the presence of the RCSI and other foreign-run institutions in Bahrain helped “keep the eye of the world” on the Gulf kingdom, but he acknowledged the dilemma the college faced.

“If the price of being there is compliance [with oppression], then that is to compromise the very essence of higher education.” He called for an “international global agreement” for higher education institutions operating in such places.

“How they can reconcile the values of academic freedom, personal liberty and freedom of expression with the regimes that they are located in or recruiting students from? It’s a bigger issue than RCSI but that is not to absolve RCSI from its responsibility.”

Earlier this week RCSI chief executive Prof Cathal Kelly rejected accusations by Ceartas (Irish Lawyers for Human Rights) that its Bahrain campus was not fit for accreditation by the Irish Medical Council due to abuses in Bahraini hospitals where RCSI students receive training.