Little Green Cars gear up for the big time 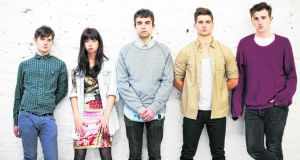 
So far, so brilliant. Dublin band Little Green Cars is a picture-perfect example of how to do the right things at just the right time. Yes, their rise in profile over the past 18 months in particular (they have been around in one form or another since 2008) might be a confluence of luck, talent and strategy. But a work ethic of continuously pushing, shoving and improving the quality of their material has brought them to a point where their forthcoming debut album, Absolute Zero , has become one of the year’s most anticipated.

Added to this atmosphere of heightened expectation is a real sense that the band is on the cusp of major recognition outside Ireland: they were selected for the BBC Sound of 2013 list; they are playing shows at crucial industry events such as Austin’s South by Southwest and important US festivals such as Coachella; and the band are signing to US record label Glassnote, which has guided the likes of Two Door Cinema Club and Mumford & Sons to major crossover awareness.

There’s a lot going on, then, but in the meantime there is this sold-out gig to contend with (a show in the more expansive Vicar Street is scheduled for May), a bunch of braying fans at the front and – unusually for this venue – an attentive crowd at the back. The beginning is nerve-wracking: a fragile folk-driven four-part harmony tune that you fear will be drowned out by Friday night revellers is instead lifted to the ceiling by a quickly silenced crowd.

The incremental improvements in quality and appreciation continue. The band’s better-known songs – Harper Lee, The John Wayne , and My Love Took Me Down to the River to Silence Me – may have pleased the latter-day fans, but others (including The Kitchen Floor , Them , and The Consequences of Not Sleeping ) manage a similar feat of fusing familiarity (slivers of Nick Drake, occasional bouts of guitar-shredding) with a distinct sense of adventure.

1 Rare whale dies after getting into distress in Wicklow Harbour
2 Coronavirus claims one more life and 11 new cases reported in Republic
3 Fintan O’Toole: Future of the American republic is in grave danger unless Trump is defeated
4 If you are young and live outside Dublin you could be in trouble
5 Bobby Storey: The IRA's planner and enforcer who stayed in the shadows
6 Ruth Negga: ‘People who say they don’t consider skin colour... are you f**king blind?’
7 Covid-19: Travel restrictions to stay and 'green list' put on hold amid fears of second wave
8 Taoiseach ‘disappointed’ he only learned of Barry Cowen’s driving ban on Friday
9 Storey funeral a reminder that IRA army council runs Sinn Féin
10 Patrick Freyne: You endearingly sentimental sociopath, I’ve just the show for you!
Real news has value SUBSCRIBE

1:00 Schengen Area countries refusing US tourists over fear of COVID-19