Travel Writer, Oregon: “The steers are lively, and make the young cowboys earn their rodeo stars” 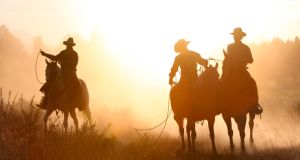 The air was dry, the sun was hot and the nights were cold and often frosty. I was at about 4,000 ft elevation on North America’s largest remaining bunch grass prairie. The Zumwalt Prairie is situated in northeast Oregon, surrounded by the Seven Devils of Idaho, Hell’s Canyon and the Wallowa Mountains in Oregon. It takes seven hours to get here from either Portland or Boise, making it one of the most remote corners in the northwest.

These lands were once safe guarded by the Nez Perce, explored by Lewis and Clark and semi-domesticated by European settlers. The settlers attempted to farm the Zumwalt, but all that remains today are the metal rings from old cart wheels and collapsed homesteads. The soil here is thin and largely unsuited to the European grasses that were planted here, but they remain, causing a loss of native biodiversity, and creating a fire hazard as the foreign grasses dry out faster than the native varieties.

I came here to help the Nature Conservancy count grass in an effort to understand the effects the European grasses have on the local wildlife. My boss, Rob Taylor, was himself a blow-in from New York, who carried everything he needed for field work safely secured to his belt. The area was just so vast: if you left something behind, you’d never again find it. I sometimes came across old ink bottles once lost or discarded by the settlers.

My shared accommodation was an old schoolhouse, not vastly different from Little House on the Prairie. I cooked my meals in heavy cast-iron pots and learned how to make sourdough bread. We remained outdoors for hours every evening, conversing about worldly topics that were abstract from where we were seated around the bronze sculpted fire pit, our faces lit by the clear night sky, surrounded by coyote howls.

Having grown up on a small farm in rural Ireland, where a small child could be used to block a gap to keep the cattle going in the desired direction, it amazed me to see how ranchers rounded up their cattle. Liza Jane McAlister and her family have run their cattle ranch for generations, rounding their Corriente cattle up on horseback. The Corriente cattle are runners and do well on this dry rough land. The beef is lean and low in fat, making it popular with Liza Jane’s customers who will come from as far as Portland. The steers are lively, and make the young cowboys earn their rodeo stars.

The Wallowa Mountains offer fantastic hiking opportunities. I was awed by sights like the Slick Rock at Hurricane Creek, pronounced “crick” by the locals. After struggling to get to the top of Sacajawea Peak at 10,000 ft, I was met with peaks and valleys for as far as the eye can see. I was amazed to be a part of it, delighted to have reached the top, and overwhelmed by the humility at how insignificant my presence was in the grandeur and sheer vastness of the wilderness.

When I wasn’t caressing blades of grass or scaling mountains, I headed to the local microbrewery called Terminal Gravity in Enterprise. My mouth still waters for their Portobello mushroom sandwich washed down with a pint of Cascadian hop flavoured IPA. One night I left without paying my tab, but they left it open until I returned the following week. The people, the environment, the landscape make Wallowa County a very special place, one I’ll forever wish to return to.

Vamos, amigos! This was a different class of language trip

Fed up with the school trips on offer, Catherine Mack seeks out a Spanish learning holiday with a difference for her son

HOLIDAY DISASTERS: Classics student SARA KEATING was with a friend in a felucca on the Nile when her runs to the riverbank reeds…