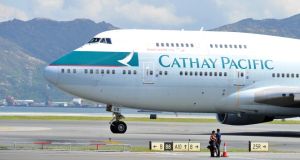 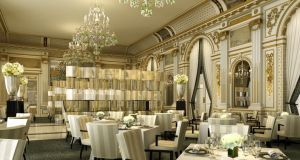 The Peninsula hotel in Paris which opens its doors next Friday 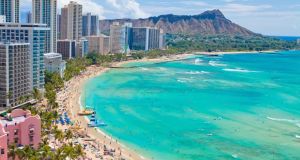 Micro-Guide: Your 60-second guide to Honolulu 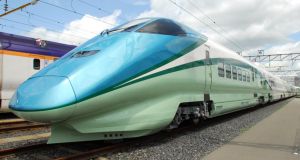 You can indulge in a foot spa, along with your fellow passengers, on the Toreiyu bullet train from Fukushima to Shinjo. Photograph: JR East

Cathay Pacific is world’s best airline
Hong Kong’s Cathay Pacific has been crowned the world’s best airline in the Skytrax World Airline Awards. The poll is compiled through more than 18 million surveys of passenger satisfaction with 245 airlines across 105 countries, including Ireland. It measures 41 different criteria, from check-in to boarding and cabin comfort to staff friendliness. Aer Lingus ranked 65th, while Ryanair doesn’t participate in such polls. Etihad Airlines pulled out of Skytrax a couple of months ago, but it didn’t stop it coming eighth, behind their great rivals Emirates (last year’s winner was fourth) and Qatar Airlines, which ranked second. Lufthansa was the only European airline in the top 10; the others were Singapore Airlines, Turkish Airlines, ANA All-Nippon Airways, Garuda Indonesia and Asiana. Despite the tragic loss of two planes in the space of four months, Malaysia Airlines finished 18th, while local rival AirAsia topped the poll of low-cost carriers. Westjet, which began a service from Dublin to St John’s in Newfoundland last month, came seventh in that category.

European debuts for Peninsula and Mondrian
The Peninsula Hotels group makes its European debut on August 1st with the opening of the Peninsula Paris (pictured right) on Avenue Kléber in the 16th arrondissement, within easy reach of the Eiffel Tower. It occupies a stunning 19th-century building that was once the Hotel Majestic, one of the city’s turn-of-the-century grands hotels and where George Gershwin wrote An American in Paris. The new hotel promises all of the grandeur and luxury of its Hong Kong flagship, with 200 rooms and 34 suites decorated to the highest standards. Rooms cost from €600; see paris.peninsula.com. Meanwhile, the soon-to-open Mondrian hotel has started taking reservations. The Mondrian London at Sea Containers in Southbank, which will open September 30, is the first of the group to open outside of the US; the original Mondrian in LA is one of the city’s trendiest boutique hotels. The London edition will have 359 rooms and will have a riverside restaurant run by chef Seamus Mullen. Room rates start at £219; see morganshotelgroup.com

Virgin in Belfast
Virgin Atlantic has announced that it will launch a summer service between Belfast and Orlando from June 2015. The route will be operated in partnership with Delta, with which Virgin has a codeshare agreement and will offer connecting services to and from US destinations.

Germany in hand
The German National Tourist Board has launched a travel app of its top 100 attractions, as voted by foreign visitors in a poll conducted between August 2013 and April 2014. The app, available as a free download for Android and Apple users, includes details on the country’s favourite tourist spots with Ludwig II’s fairytale Neuschwanstein Castle came in at number one. Search for ‘Germany Top 100’ in the app store. Berlin has announced plans for celebrations to mark the 25th anniversary of the fall of the Berlin Wall, which take place on November 7th-9th and include a 15km-long light installation along the wall’s original line. It is the fifth-most popular attraction for foreign visitors.

Five steakhouses in Beunos Aires
The Buenos Aires Tango Festival kicks off on August 13th, a two-week celebration of one of Argentina’s most significant cultural exports. The other great contribution is steak – here are five restaurants that will make carnivores salivate.

Don Julio (Guatemala 4699; mains €7-€12) A traditional steakhouse in Palermo where the bife de chorizo (sirloin) rules supreme; the cowhide tablecloths leave you in no doubt as to what this place is all about.

El Desnivel (Defensa 855; mains €5-€9) You’ll most likely have to wait for a table at this popular spot, but as you do you can watch all those gorgeous steaks sizzling away on the grill.

La Cabrera (José Antonio Cabrera 5099; mains €10-€14) It’s touristy, but the steaks are superb and the 7pm happy hour is hugely popular as everything is half price. There’s a second branch just down the street at Cabrera 5127.

Parrilla Peña (Rodríguez Peña 682; mains €5-€10) Tourists don’t usually frequent this place, where the steaks are served big and quickly – it’s more of an old-fashioned steakhouse but all the more popular with locals for it.

A bullet and a pedicure
Not content with having the world’s fastest trains, Japan Rail has introduced on-board foot spas for passengers. The Toreiyu bullet train (the name is a contraction of the English word train, the French soleil, and yu, the Japanese word for hot water) on the Fukushima-Shinjo line will have a car with two 2.4metre-long foot spas that can be used by four passengers at once. There is also a bar car with tatami-mat flooring and cherrywood tables, seejapan.co.uk. Photograph: JR East

Ban on balcony smoking
Norwegian Cruise Lines (NCL) is the latest cruise company to declare a ban on smoking on balconies of cruise ships. The ban comes into effect on November 1st, and brings NCL in line with all other companies, except Holland America, in stopping smokers from lighting up on their cabin balconies. Passengers wanting to smoke will either have to trek up to the top deck smoking area or take their chances in the casino, where smoking is still allowed – as long as you’re gambling.