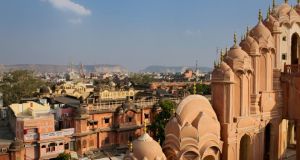 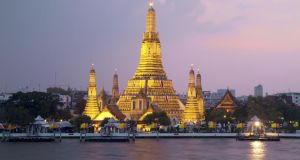 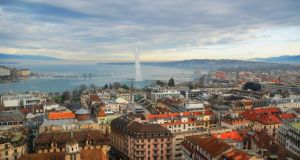 Geneva: exhibitions explaining how the Hadron Collider works are worth the 8km tram ride west of town

The Department of Foreign Affairs has urged visitors to Thailand to exercise “extreme caution” when in country (especially Bangkok, above) and follow the instructions of the authorities, which include obeying the curfew (10pm to 5am), staying clear of protest groups and not congregating in groups of five or more.

It is also advised that you register with the Department of Foreign Affairs before you travel, see (dfa.ie/travel/citizens-registration) and check your insurance policy as some exclude cover during a coup d’etat. The curfew does not apply travelling to and from the airport, but visitors must carry passports and tickets. In 2013, 63,000 Irish travelled to Thailand; between January and April the numbers were 20,897, up 11.5 per cent on the same period last year despite the instability that has been apparent since November.

BOOK A LITERARY TOUR London bookshop Foyles has announced a series of literary tours as part of its plan to be a “bookshop of the future”. From July, the company will run tours in partnership with Cambria Literary Tours to literary destinations in the UK. They will be for groups of up to 25, who will be provided with a reading list for each tour.

In January 2015, Foyles will run a 13-day Passage to India tour hosted by novelist Marcel Theroux that will take in the Literary Festival in Jaipur (above). UK tours range from one-day for £95, to £245 for two days, including overnight accommodation. The India tour costs £5,170/€6,376. See foyles.co.uk/literary-tours

SIT BACK, RELAX An alternative to self-drive vineyard tours is to let someone else do the driving, which is what SmoothRed (smoothred.co.uk) offers on a five-day tour of Champagne, Chablis and Burgundy. The €800 price includes Eurostar tickets from London, four nights’ B&B, car hire between regions and chauffeur-guided tours of four houses in Reims and two vineyards in Chablis. Alternatively, you can visit the sites of the Battle of Normandy by taxi, organised by the La Bergerie gîte (normandie-weekend.com) in Orne. The tour covers 130km and the price of €259 includes two nights’ half-board, a guided tour with picnic lunch and afternoon tea.

AMSTERDAM, WALDORF-STYLE The Dutch generally eschew displays of luxury, but the newly opened Waldorf Astoria on Amsterdam’s main canal, Herengracht, is about as opulent a hotel as there is in Europe. Set across six adjacent 17th- and 18th-century townhouses, it has all the hallmarks of a European grand hotel: a magnificent lobby, 93 beautifully appointed rooms and the city’s largest private garden out the back. The underground bar is in the vault of a one-time bank and there’s also a Guerlain spa. Rates start at €378; see waldorfastoria.com

TRIVAGO HOTEL PRICES The average hotel room price in Dublin for May was €131, up 16 per cent on last year, according to trivago.ie’s monthly hotel price index. The average for Ireland was €106, up two per cent on last year, a marginal change reflected in most of the country’s other major urban centres. Bucking the trend was Donegal, where a room in May cost an average of €155, up a whopping 25 per cent on the same period last year. Venice was Europe’s most expensive city, with an average hotel room price of €281.

NEW RULES IN PORTUGAL Portugal has introduced a two-tier legal alcohol limit for motorists. Drivers with less than three years’ experience have a limit of 20mg of alcohol per 100mg of blood while the more experienced are allowed up to 50mg. There are new rules governing roundabouts: only those taking the first exit can use the right-hand lane; everyone else must use the inner. Get it wrong and could be fined €300.

FIVE PLACES TO STAY IN RIO

The World Cup kicks off on June 12th without Ireland, but Rio is still worth the trip. In a city so big, it’s hard to pick where to stay. Here are five full of character:

Casa Beleza (Laurinda Santos Lobo 311; casabeleza.net; r from €75). It only has four rooms, but this lovely 1930s house was once the governor’s mansion. There’s a nice pool and garden.

Don Pascual (Casa 12, Estrada do Sacarrão 867, Vargem Grande; donpascual.com.br; from €80). It’s 40km west of the city centre, but this hotel and restaurant has split-level rooms, wonderful food, and lush garden and swimming pool.

Hotel Santa Teresa (Almirante Alexandrino 660, Santa Teresa; santa-teresa-hotel.com; from €275). Rio’s most beautiful boutique hotel is in the restored main building of a 19th-century coffee plantation. Maze Inn (Casa 66, Tavares Bastos 414, Catete; jazzrio.info; from €40). Don’t be put off by its address in the Tavares Bastos favela; this guesthouse has beautiful rooms and dorms (€20), great views of the bay and jazz parties twice a month.

Do CERN(cern.ch; take tram 18 to terminus) Exhibitions explaining how the Hadron Collider works are worth the 8km tram ride west of town