The future of air travel 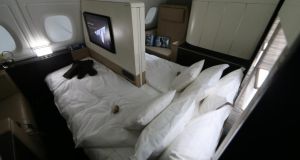 The Business Class Studio of the new A380 aircraft of Etihad Airlines. Photograph: Karim Sahib/AFP/Getty Images

A text message will tell you what gate you’re departing from, and another one later will tell you when that gate is open, allowing you more time for some last-minute shopping, reflection in the thinkpod or a few extra downward dogs in the yoga studio, depending on your mood. During your flight, you’ll stream movies on your tablet and use the same device to do some online supermarket shopping so that when you arrive home from your two-week holiday you’ll have a bag of fresh groceries waiting for you.

By 2020, the in-flight experience will be tech-savvy and highly customised; gone will be the the current largely homogenised affair, as airlines learn to tailor their offerings to take account of passenger preferences and tastes, much like the hotel industry does today. The airline industry has traditionally lagged behind other tourism sectors when it comes to creating customer profiles to anticipate their needs, but Trevor Buckley of the Irish Aviation Research Institute believes that airlines will increasingly benchmark against trends in the hotel sector in order to meet customer expectations.

Ryanair marketing director Kenny Jacobs believes that the next few years will see an overlapping of the in-flight experience with a host of other consumer experiences such as retail, dining and hospitality. Jacobs predicts that passengers will be able to pick from a selection of themed flights: for instance, gourmet fans might opt for a “fly ‘n’ food” trip, where freshly prepared sushi is available on a conveyor belt in the aisles; or board the transatlantic steakhouse, where on-board chefs serve made-to-order cuts of the finest Wagyu beef. There will be flights themed for families, ones for shoppers, and for sports fans there’ll be retired sports stars telling anecdotes and hosting Q&As. For the airlines, it’ll all about customising the experience so that flying becomes less of an ordeal to endure and more of an experience to enjoy.

What looks unlikely to change is airline policy on the use of mobile phones. It’s been proven they’re perfectly safe, but the US Federal Communications Commission has said it will maintain its ban on them on privacy and comfort grounds as poll findings reveal that passengers would prefer not to share a one-sided phone conversation with a stranger. It’s expected that other authorities will follow suit.

We may not be on our phones but we’ll spend a lot of our time online. Superfast broadband connectivity will be standard on all airlines, allowing passengers to download content directly on their mobile devices. Those screens on the back of the seats will disappear as airlines work to create lighter seats, which will significantly reduce the weight of the plane and the fuel burn that accounts for 40 per cent of an airline’s total costs.

The biggest changes will take place in the front-end seats as the world’s airlines scramble for position in the intensifying race for loyalty in front of the curtain.

Earlier this month, Etihad took the lead with its flashy new first and business class cabin designs – the three-room Residence was particularly impressive – getting the jump on rivals Emirates, and Singapore Airlines who describe their first class suite as “a private sanctuary in the sky”.

First class grabs the column inches, but the real battleground is in business class as airlines fight for the custom of the business frequent flyer. Raymond Kollau, founder of airlinetrends.com, thinks business class will just keep getting better. “It will become something in between business and first class,” he says.

When launching the new design, Etihad chief executive James Hogan spoke of the importance of the “halo effect”. This is echoed by Timothy Miller, programme manager at aircraft cabin design consultancy Teague, who believes that an airline’s reputation for pampering and extravagance will go a long way toward fostering upper-middle-class awareness and desire to be part of that experience, even if it’s in economy class which, in the case of premium airlines, is still likely to be better than the average carrier.

First and business class passengers will enjoy the benefits of improved check-in systems and upgraded lounges, and, most importantly, loyalty programmes where points are accrued by money spent rather than miles flown. Since the cost of a basic coach ticket will continue to remain fairly low, the majority of economy class passengers will not be able to get enough points to justify membership.

In five years’ time, luggage allowances will be roughly the same, but new technology will reduce long check-in queues at airports and the loss of bags in transit. Permanent electronic baggage tags will be the norm; all a passenger will have to do is update them via their mobile, scan the tag and deposit their bag on a conveyor. They’ll also use their mobile devices to keep track of their luggage via a GPS-enabled app.

Our mobile devices will be the most important piece of our travel kit, playing a part in every aspect of a journey. We already use them as boarding cards but in the future we’ll be checking them for details of our gate, departure times and final calls – passengers waylaid in the airport will receive a text telling them their gate is about to close.

Within the next few years, the x-ray security bottleneck will be relieved through innovative lane configurations and the widespread rollout of high-tech scanners. “Self-select” lanes where passengers are filtered according to type (expert, casual and family passengers) are currently being trialled in 51 airports in the US in an effort to find the ideal system to speed-up the flow through security.

New scanners that detect and identify concealed objects will cut down on passenger inconvenience, reduce the need for intrusive searches and allow for laptops and tablets to stay in their bags.

Finally, there’s the question of cost. Industry experts all agree that the price of an airline ticket will remain relatively steady for the foreseeable future, with the airlines committed to ensuring that the entry-level charge to the flying experience of the future remains affordable. Everything else, however, will be subject to a charge which will put the final cost of the flight very much in passengers’ hands.

The next five years will see both subtle and dramatic changes aimed at reducing the monotony of the flying experience and making it more fun. The airlines talk of creating hotels in the sky where passengers can be pampered, distracted and entertained. That might sound a little optimistic – a cabin on an airliner remains a restricted space, no matter how good the food or how soft the blankets – but it’ll be much easier to pretend.