It is a thrill to be young and lose yourself for months in the vastness of China, but you can cover a lot of ground – and be better looked after – in a rapid guided tour too 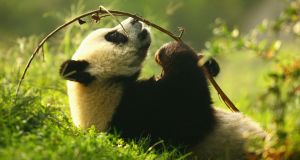 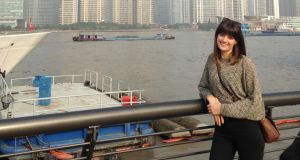 Ciara Kenny on the Bund in Shanghai. 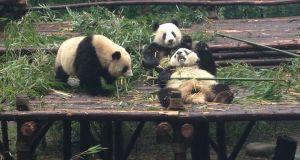 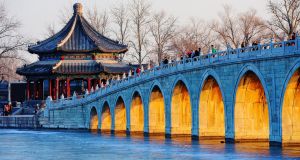 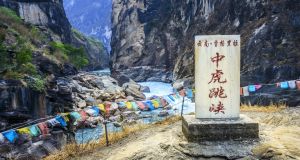 There were nine million bicycles in Beijing when Katie Melua wrote her hit song just before my first visit to China a decade ago, but sitting stationary in gridlocked eight-lane traffic in the city recently, I wonder what on earth has happened to them all. The wide cycle lanes I was so impressed by have been taken over by swerving scooters, carrying entire families, and by shiny, expensive-looking SUVs. There are few cyclists braving the morning rush-hour mayhem, and it is no wonder: the number of cars in the city has recently hit six million.

I spent a lot of time sitting on buses and trains during my first visit to China too, but far away from traffic like this. Beginning a year-long trip, I spent three months with two friends, travelling for thousands of kilometres from Shanghai to Vietnam.

We took slow trains lasting 38 hours, surrounded by families who taught us how to slurp our noodles properly and spit chicken bones on to the floor. We trekked on horseback up mountains along the Tibetan border, camping under the starriest skies, bellies full of smoky pumpkin stew cooked over an open fire. After a hair-raising 13-hour journey along a crumbling cliff edge in a rickety minibus, we hiked the Tiger Leaping Gorge along the Jinsha River.

In the cities, we spent hours getting purposely lost in parks and back streets, sampling every variety of dumpling we could find from stalls and tiny local restaurants.

With no one telling us what to do or where to be for an entire year, we had the freedom to do whatever on earth we wanted. We looked on at the tour groups being herded around the Forbidden City in Beijing with disdain. We were intrepid travellers, not tourists, we told ourselves smugly.

We weren’t long back in the working world before we learned that the opportunity to take three-month holidays to soak in all a country such as China has to offer is a rare gift. This is why guided tours are a popular way to travel, especially in a country that is notoriously difficult to navigate as a foreigner. When I’m offered the chance to go again, this time on a tour, I jump at the offer, but wonder how the experiences will compare.

The trip couldn’t be more different from my first visit. The China Experience itinerary with Wendy Wu Tours takes in the major tourist attractions in three cities – Beijing, Xi’an (to see the world-famous terracotta warriors) and Shanghai – but our trip also includes the city of Chengdu, so that we can visit China’s most successful panda-breeding centre. And we’re doing it all, including international travel, in just nine days.

That first early-morning journey through rush-hour traffic was taking us to the Great Wall. The first fortifications here in the Jundu Mountains were built about 2,500 years ago, and were then joined to the Great Wall in the late 14th century during the reign of the first Ming emperor. But there’s now little evidence left of the original wall, as the structure that busloads of tourists swarm over today was completely rebuilt in the 1990s.

Our guide, Sellinna, tells us that autumn – when we are there – is usually the best time to see this part of the Great Wall, as visitor numbers are petering out and the golden foliage glows from the surrounding mountains. But as we disembark the bus into thick fog, the wall, despite its might, is barely visible from the car park.

The day is cold and damp, and we can’t see anything but white as we ascend the steep and snow-spattered stone steps into the clouds. I’m glad I can remember what it’s like on a hot, clear day.

We’re under instructions from Sellinna to be back in 90 minutes, so we turn around at the third tower. My heart sinks when she tells us our next stop is the Jade Museum, which is, as expected, a giant tourist shop with restaurant upstairs, where we have lunch. We’re only a few hours into the tour itinerary and I’m already feeling the constraints I feared would emerge on a holiday with a guided group.

But during a chilly walk through the decidedly wintery Summer Palace, I begin to appreciate the benefits of a local Beijing guide. On my last visit here we were happy enough wandering around the pretty lakes and pagodas, but with Sellinna we learn all about the indomitable Empress Dowager Cixi, for whom the 3sq km imperial garden, destroyed by the British and French during the Opium Wars of the early 19th century, was completely rebuilt in 1888, using money earmarked for the military. After seizing power through a coup at just 25 years old, after her husband’s death in 1861, Cixi in effect governed China through her nephew by poisoning and executing her rivals, in her later years from the Summer Palace, until her own demise in 1908.

Time and again for the rest of the trip, I’m reminded of the value of having a local guide to explain the country’s tumultuous past and to answer our many questions about modern China from their personal perspective.

In Chengdu, Tang Yu brings us on an early-morning walk through the People’s Park as local residents gather in small groups in the plum-and-begonia-filled gardens to dance, practise tai chi, sing, or even get their ears cleaned.

As we pass “Matchmaker’s Corner”, where dozens of anxious parents come each day to advertise their sons and daughters for marriage, she tells us about the long history of matchmaking agencies and services in China, and about her personal experience of dating as a modern single woman. Her parents have visited Matchmaker’s Corner many times with a laminated sheet displaying her photograph, height, weight and occupation. But, like most other young people her age these days, she’s much more interested in meeting potential partners online.

Our Xi’an companion, Sally, races through 3,000 years of the city’s history as we sit in the back of the minibus on the way from the airport. She takes us from the birth of ancient Chinese civilisation in the region, to the Silk Road (which terminated in Xi’an) and right on up to the discovery of the 8,000 life-size clay soldiers, 670 horses and 130 chariots buried nearby in pits around the tomb of Emperor Qin Shi Huang to protect him in the afterlife.

Each warrior was crafted with unique hairstyles, facial features, uniforms and weapons. Just one has been found completely intact, and teams of archaeologists are still piecing together the broken pottery in the pits below as visitors watch on.

We could have read about all this in a guidebook, of course, but without Sally we would have missed the spot where a peasant farmer first discovered the warriors while digging for a well (there’s no English sign) in 1974. We would also have left without learning that it takes an archaeologist three months on average to rebuild just one warrior, and would have paid way over the odds for bowling pomegranates from the stalls lining the museum car park.

No time is wasted idling when in the company of our guides in each city: for example, in the minibus on the way back to the hotel in Xi’an, Sally gives us a basic lesson in how to make sense of the ornate characters of the Chinese alphabet, and we learn to write the numbers one to 10 in Mandarin on the back of an envelope.

Being guided makes everything so easy, too. Every decision is made for us, right down to what we eat at every meal in restaurants where a lack of an English menu makes it impossible for us to order for ourselves. Only when you’ve experienced just how difficult and time-consuming it is to travel in China independently can you truly appreciate the benefits.

Looking back on the itinerary, it is a wonder how we managed to squeeze so much in, from Tiananmen Square and the Forbidden City in Beijing to the panda-breeding centre in Chengdu, a night walk around the ancient city walls in Xi’an, a river cruise alongside the Bund waterfront area in Shanghai, shopping in a fake-goods market and three “traditional” evening shows featuring acrobats, Chinese opera, and dance.

Sometimes travel is all about getting lost in order to find something surprising you didn’t think you were looking for. But when you’re lacking time or energy, or you’re looking for a different learning experience, it can be enlightening – and a hell of a lot easier – to have your hand held on a guided tour. It is the ultimate privilege to have experienced both in a country as fascinating as China.

Ciara Kenny travelled as a guest of Wendy Wu Tours, which offers all-inclusive packages to China for prices starting at €1,990 for a nine-day trip. Prices include Emirates flights to/from Beijing, Shanghai or Chengdu, with a stopover in Dubai. See wendywutours.ie and emirates.com/ie

Back to school: We went into a tailspin when our eldest had a temperature
2

The Covid-19 pandemic is changing the way we speak
9